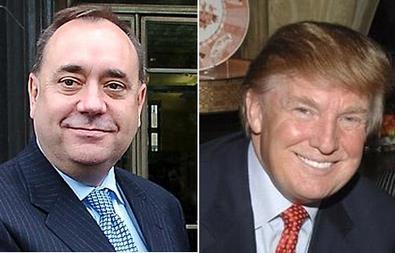 Scotland's First Minister Alex Salmond is under pressure to explain a meeting he had with Donald Trump’s spokesman the day before ministers announced they would have the final say on the billionaire’s plans for a golf resort in Aberdeenshire.

According to reports in this morning's Times, Salmond has been asked to explain the circumstances and timing of the meeting with Mr Trump’s representative at a hotel near Aberdeen last Monday.

The next day, the Scottish Executive said that it was “calling in” the application for the project in Aberdeenshire, which had been rejected by local councillors the previous week.

It has also emerged that Jim McKinnon, the Executive’s chief planner, held a separate meeting with the Trump camp last Tuesday, only hours before the Executive made its announcement.

Salmond has been asked to make a statement to the Scottish Parliament on the circumstances of the meeting.

Last night he denied any impropriety and insisted that he had attended the meeting in his capacity as MSP for Gordon.

As the constituency MSP not only am I absolutely entitled but I have a bounden duty under the parliamentary code to meet people on all issues of importance to my constituency.

He told the paper: “As the constituency MSP not only am I absolutely entitled but I have a bounden duty under the parliamentary code to meet people on all issues of importance to my constituency.

“I have met people on both sides of the debate, including Sustainable Aberdeenshire and Michael Forbes, the farmer objecting to the development.”

“As the constituency MSP, I am debarred from having any role in the planning decision process, and John Swinney [the Finance Secretary] will be the responsible minister.

“As First Minister I have been advised to make no public statement either for or against the proposed development, and I have abided by that to the letter.”

George Sorial, Mr Trump’s main representative in Scotland, would neither confirm nor deny the talks, saying only that “things are so sensitive right now”.