Short-selling in Hammerson stock hit a record high last week, days after the group reported a sharp fall in the value of its portfolio and confirmed plans to slash its dividend. 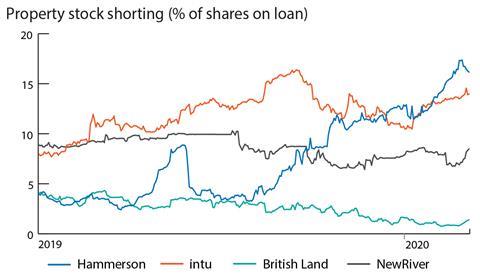 The percentage of the shopping centre landlord’s shares out on loan, a proxy for short-selling, rose to more than 17% at the start of last week, according to data from IHS Markit.

Short positions in Hammerson have risen from about 12% at the start of the year, a sign that the market expects the share price to drop. The company’s share price has already crashed by 43% this year. In recent days, the shares have fallen particularly sharply following intu’s failed equity raising and the stock market sell-off sparked by coronavirus fears. Some short sellers have taken advantage by closing up their positions.

The hedge funds that have especially large short positions in Hammerson include Texas-based Maverick Capital, Connecticut-based Lone Pine Capital and New York’s Woodson Capital Management, according to ShortTracker, which uses data sourced from the Financial Conduct Authority showing all short positions of more than 0.5% of issued share capital.

The uptick in shorting activity means that Hammerson is now one of the most shorted listed companies in the UK. Only Premier Oil, Paddy Power Betfair, Metro Bank and AA are more heavily shorted, according to ShortTracker.

However, at the same time as shorting of Hammerson’s shares has increased, some of the company’s biggest shareholders, including Norges and APG, have upped their stakes. Hammerson’s top-20 shareholders account for just over 80% of its shareholder register today, up from 74% in July.

The impact of the retail crisis on Hammerson’s finances were laid bare in full-year results at the end of last month, which showed the company’s net asset value fell by 20% last year. It also revealed it would rebase the dividend “to a sustainable level” in an effort to shore up its balance sheet.

Other companies with high exposure to retail have been targeted by short-sellers. Hedge funds including Odey Asset Management have made millions shorting intu, which is now trading at just 6p, down from over 200p two years ago. About 14% of the company’s shares remain out on loan.

NewRiver and British Land have seen an increase in shorting activity in recent weeks, but are not as heavily shorted as Hammerson and intu.