Sir Philip Green’s retail empire Arcadia, which owns brands including Topshop, Burton and Dorothy Perkins, has collapsed into administration, making it one of the highest-profile casualties of the Covid-19 pandemic to date. 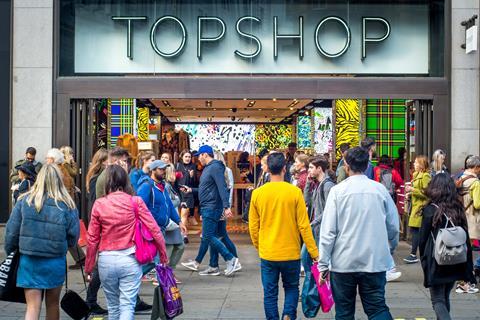 Arcadia has 444 UK shops and employs around 13,000 people. Deloitte, which has been appointed as administrators, said the group’s stores would continue to trade for the time being and that no immediate redundancies would be made.

“This is an incredibly sad day for all of our colleagues as well as our suppliers and our many other stakeholders,” said Arcadia chief executive Ian Grabiner.

“Throughout this immensely challenging time our priority has been to protect and preserve the financial stability of the group in the hope that we could ride out the pandemic the other side.”

The administration is expected to trigger a scramble amongst creditors to take control of company assets. The group’s pension fund, which has a deficit of around £350m, is likely to take priority over the remaining assets.

Last year, Arcadia’s landlords were hit when the group narrowly forced through a CVA, which led to a reduction in rents being paid and the closure of 50 stores.

BPF chief executive Melanie Leech said: “It is hugely disappointing that Arcadia hasn’t managed to find a way forward, and that so many jobs are at risk. Property owners and other creditors will also be hit.

“It was only last year Arcadia undertook a controversial CVA, forcing property owners to accept significant rent cuts and promising in return that this would secure the business’ future.

“Retailers are grappling with challenges today that pre-date this pandemic but Covid is bringing into sharper focus which businesses have invested, innovated and adapted to changing consumer behaviours. Those that have not have very little resilience in the face of economic headwinds and it is their staff and their creditors including property owners, and the millions of pensioners and savers they represent, who are paying for their failure.”