Southern Housing Group has received planning permission from Adur & Worthing Council for a mixed-use housing development at Free Wharf on the River Adur. 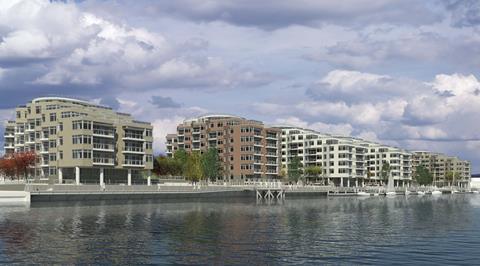 The site is a disused wharf on Brighton Road that was formerly used for importing marble and stone aggregates and lies within the wider Shoreham Western Harbour Arm Regeneration Area.

Southern’s scheme will comprise of 540 new homes, 30% of which are ringfenced for affordable housing, split across 10 new buildings, ranging from four to nine-storeys, Property Week can reveal.

In addition to the residential element, the scheme will also contain 30,000 sq ft of commercial space alongside 512 car parking spaces and 596 cycle spaces. Scheme architects CZWG have also proposed an extensive public realm with a riverside walk and cycleway, to be integrated into the new flood defences that will be incorporated into the development.

Southern Housing and CZWG expect to start work on site in autumn. It is the first major scheme approved in the area for Southern since the group appointed development director Alan Townshend as its new chief executive to replace the retiring Tom Dacey in May.

Jeremy Barkway, strategic partnership manager at Southern Housing, said: “This is a largescale and long-term investment by Southern Housing Group. The quality of the design achieved to date will be critical to the success of the project, benefiting both the local community and people who will be living, working and visiting this important harbour-side regeneration.”

The Free Wharf scheme forms part of the council’s vision for a residential driven, mixed-use redevelopment that provides access to the river’s edge along the full length of the Western Harbour Arm, which stretches from east of the town centre towards the harbour entrance and the sea.

Earlier this year, Southern completed the acquisition of 496 homes from Hyde Group for £43m. The major stock acquisition was the largest for the housing association since 2015 and saw Southern build up its stock across seven locations: Woking, Thurrock, Southend, Hastings, Rother, Wealden, and Sevenoaks.