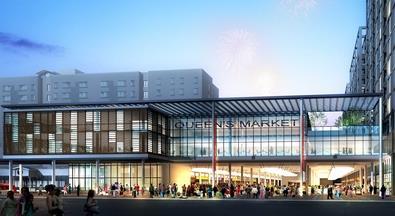 St Modwen has submitted a detailed planning application for the regeneration of Queens Market in London’s East End after extensive negotiations with local traders which have fiercely resisted the scheme in the past.

The plans for the scheme at Green Street in Newham include proposals for a new market mall on the site of the existing market, which will include 164 market stalls totalling 23,000 sq ft and 68,600 sq ft of retail space.

It will also provide 350 homes around a landscaped courtyard and a 21,500 sq ft ‘front office’ facility onto Green Street.

Nick Kay, development director at St Modwen, said: ‘We have been working closely with Newham Council, traders and other third parties since we were appointed as the Council’s preferred developer in March 2006, and the submission follows two years of extensive consultation.’

‘Our plans will deliver a multi-million pound regeneration scheme in the heart of Green Street in Newham, at the centre of which will be a new Market Hall that will continue to be a valuable resource to the local community.

'We look forward to working with all traders and shopkeepers, other stakeholders and the local authority to ensure that Queens Market remains open for business.’

The Queens Market Traders Association, which represents many of the shopkeepers and stall traders at Queens Market, said it welcomed the planning application. A public consultation of twice revised plans was undertaken at the end of 2006.