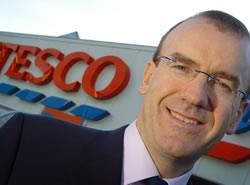 He also pledged to press ahead with Tesco’s store development programme in the UK and across the globe, despite growing fears that an economic slowdown will hit all retailers hard next year.

He told a 300-strong audience at the Park Lane venue: `We have halved our energy use per square foot since 2000, and we will have to halve it again by 2008.’

Leahy pointed to newly-opened, Tesco stores made from sustainable wood products in Shrewsbury and Wick as examples of the progress it has made.

`They have new refrigeration systems, sustainable lighting and combined heat and power,’ he said. However, Leahy said that for Tesco and other retailers to continue to step up their Green game they would need incentives from Government – with planning at the fore.

Tesco was recently one of the big supermarkets at the heart of a Competition Commission report into the sector which largely cleared them of `landbanking’ to the detriment of the consumer.

`Now our stores can be very small or very large, they can be instrumental to regeneration projects, they can be part of complex mixed use, and we are increasingly the lead developer.

`That explains our long development pipeline, and why I think people are confused about our landbank.

`I can tell you that no one is sitting on any landbank. The slowness of the process is why I’ve called for better planning resource all over the UK.’

`You can’t separate property from retail,’ he said.

He recalled in the early 1980s how Tesco – which at that time was squeezed between Marks & Spencer and Sainsburys and bargain basement retailers – had struggled to raise finance for its development programme.

Leahy said Tesco’s answer was to sell much of the small, high street units assembled by the grocer’s founder Jack Cohen to fund the programme.

Tesco is also using the proceeds from limited UK sales to fund its overseas expansion drive, he said.