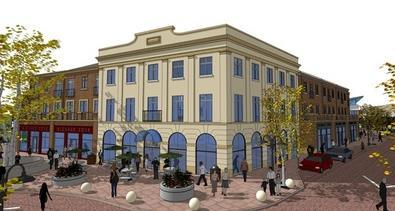 Tesco has signed up to anchor a £35m leisure scheme in Lancashire which is part of the Buckshaw Village development in Chorley.

It has taken a 35,000 sq ft store at Henry Davidson Developments’ 18 acre scheme at Buckshaw Village.

The scheme is one section of the regeneration of the 650-acre former British Aerospace and Royal Ordnance site to develop a 4,000 home village and 127 acres of commercial space.

Development Securities funded the purchase of the site, which is now being developed by Henry Davidson Developments with the residential element masterminded by a consortium of housebuilders.

A railway station, health centre and primary school are also planned on the site.

The Tesco deal is the first at the 18 acre portion of the scheme currently being developed by Henry Davidson Developments’ subsidiary, Eden Park Developments (Buckshaw).

The scheme will also include 56,000 sq ft of retail space and around 70 apartments.

Henry Davidson Developments managing director Scott Davidson said: ‘This is a very exciting scheme, part of an award winning development aimed at regenerating the area after the loss of the British Aerospace site.

‘The fact that we’ve signed Tesco for the anchor store means we expect a high level of interest from national operators keen to benefit from the footfall it will generate.’