Hollywood Bowl and The Botanist have signed up to take over 30,000 sq ft at The Deck in Bracknell. 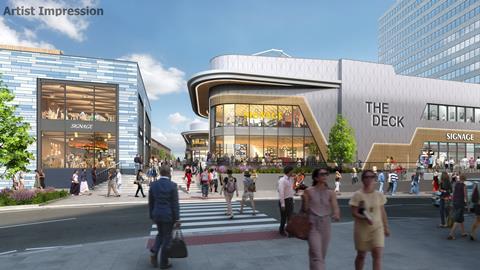 The new development will see the Bracknell’s former Bentalls unit transform into a covered public space with new food & beverage and leisure units linking into both The Lexicon and the refurbished Princess Square.

The bowling operator has agreed to take 23,000 sq ft at The Deck to install 20 bowling lanes, a bar, diner and an amusements area. The botanist will take 8,000 sq ft featuring a new roof terrace.

Other retailers including Phase Eight and Silentnight as well as PureGym have already signed leases within Princess Square.

“The announcement of these lettings solidifies The Lexicon’s reputation as a stand-out retail and leisure destination, with more to come as plans for The Deck and more new names move forward and look to revitalise the day and night economy of Bracknell,” said Harry Pickering, head of UK retail at Schroders.

Peter Courtney, director at Lunson Mitchenall, added: The signing of Hollywood Bowl and NWTC is testament to the success of a regenerated Bracknell town centre and its ability to pre-let best in class operators in what is a difficult market. These two top tier brands will enhance the leisure offer for The Lexicon and will completement the quality operations already on offer.”

CBRE and Lunson Mitchenall are acting as joint agents for The Lexicon.

Lunson Mitchenall are the sole agents for The Deck at The Leixcon.