Boris Johnson’s government is facing calls to clarify its relationship with a lobbying firm linked to a Tory donor’s £1bn property development that was given the controversial go-ahead by communities secretary Robert Jenrick.

The approval granted by Jenrick to Richard Desmond’s project the day before a community levy would have been imposed saved the former newspaper magnate £40m, and has prompted “cash-for-favours” accusations.

Now leading opposition MPs are raising questions over the relationship between Thorncliffe, a public affairs company which has had Desmond’s Westferry Development listed as one of its clients, and senior Downing Street figures. 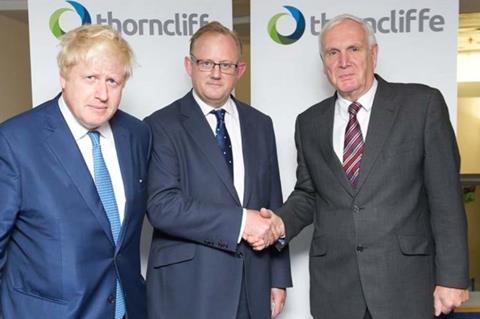 Thorncliffe’s managing director Richard Patient, described in some circles as ‘a Tory fixer’, has spoken of his close links to senior Government figures and can be seen pictured, left, with the PM and his strategic adviser Sir Edward Lister, during a Thorncliffe-partnered event at Conservative Party Conference in September 2014.

It is this potential closeness which Labour is now seeking to probe as part of the Westferry controversy.

Clive Betts, who chairs parliament’s housing, communities and local government committee, told PropertyWeek that he wants Jenrick to disclose any potential involvement that Thorncliffe had in discussions with the government over the Westferry project.

He said: “Lobbyists do have relationships with ministers from time to time but they should be transparent, they should be declared and they shouldn’t lead to inappropriate decisions that are under the counter and not publicly available.”

“We expect the secretary of state to provide us with documents including those sent directly to him by Westferry or Mr Desmond, but also any sent on behalf [of Westferry] by the lobbyist.”

The Westferry development was given the go-ahead in January when Jenrick overruled the local council and the government’s planning inspector to approve the development by Desmond’s company Northern & Shell.

Jenrick’s green light came one day before a new community levy from Tower Hamlets council on the project would have kicked in, costing Demond an estimated £40m.

However, the move was challenged by Tower Hamlets Council.

Jenrick subsequently had to quash his approval.

He accepted that his decision had been “unlawful by reason of apparent bias”, adding that he would take no further part in the matter.

Shadow housing minister Mike Amesbury told PropertyWeek: “If there is nothing to hide, Boris should put all the possible information in the public domain. Get it out there and explain away some of these photographs that seem to be appearing.”

Amesbury said that he plans to lay a number of further questions in parliament about the Westferry development.

Jenrick told MPs that he had acted in “good faith” and “within the rules” when he backed Richard Desmond’s scheme for 1,500 homes on the Westferry Printworks site in Docklands, east London.

On social media Patient has displayed his political contacts, saying in one post that he knows and likes Dominic Cummings, and in another that he has met chancellor Rishi Sunak “many times”.

Patient also says he has known Christopher Pincher, the housing minister, for 30 years.

Thorncliffe was previously called Indigo Public Affairs, but rebranded in 2014 after a Daily Telegraph investigation reported on councillors offering themselves for hire to property developers, citing Indigo’s client brochure which listed current and former councillors it employed to help achieve planning approval.

Despite Thorncliffe stating that it was not acting for Westferry at the time, the office of the registrar of consultant lobbyists has Westferry Developments Limited listed as one of Thorncliffe’s clients from its current client list (covering January to March 2020).

A spokesperson for the office confirmed that a client must be declared if either lobbying has taken place or payment has been received in a quarter. This means that the same client may be declared in two different quarters for the same lobbying activity.

In a statement to Property Week, Richard Patient said: “We had no part in the Secretary of State’s decision to grant planning permission. We have never carried out consultant lobbying for Westferry at any time.  Our contract with Westferry ended in March 2019, several months before Jenrick became Secretary of State.”

Asked why Westferry was still listed as a client on the lobbying register, Patient added: “After the contract ended, consultant lobbying was discussed which never happened so we exercised all due diligence to ensure we were not committing an offence under the Transparency of Lobbying, Non-Party Campaigning and Trade Union Administration Act 2014.”

When asked to comment on the government’s relationship with Thorncliffe a No 10 spokesperson responded: ”10 Downing Street had no involvement with the secretary of state’s appeal decision. No-one in No10 has discussed this appeal with the applicant or his representatives.”

On the Thorncliffe website it states that since the company was founded in 1999 it has helped secure approval for 57,889 homes, 18,621 student beds, 5.9m sq ft of retail and 14.6m sq ft of business uses. The company claims that “for the projects where we do the full service, our success rate at planning committee is 94.5%”.

A list of Thorncliffe’s clients past and present reads like a who’s who of the property industry, spanning a broad range of FTSE and international developers.

In February Thorncliffe hosted an industry event during which Patient interviewed Jenrick on stage about his thoughts on the sector.

A spokesman for Jenrick said the meeting was an official “stakeholder” event, and he had been accompanied by a private secretary, a senior civil servant.

In Prime Minister’s Questions this week Johnson was asked whether any of his officials or advisers had correspondence or discussions with Jenrick about the project.

Johnson replied: “I certainly had no correspondence about this matter nor as far as I’m aware did any of my officials.”

Steve Goodrich of Transparency International UK said:“Whenever lobbyists boast of their connections to those in high office, it begs the question whether they’re securing privileged access and potentially influence for their clients.”

He added: “There must be full disclosure over the context to the government’s unlawful decision.”