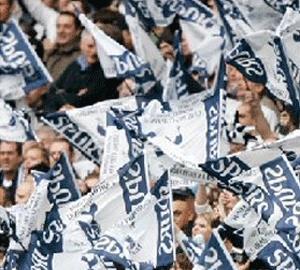 It plans a scheme incorporating a new stadium with a capacity of 60,000, a lub museum, shops, homes, a new base for the Tottenham Hotspur Foundation and public space.

The club said the scheme would be developed on the current site and adjacent land, ending concerns about a move out of the borough. It also said there would be no need for a temporary move during construction of the stadium which will be to the north of the existing one.

There will be a public exhibition of the plans beginning on 14 November until 18 November.

The Club said it had taken the decision after concluding an extensive review of suitable sites and viable alternatives, its preferred stadium option is to remain at 'the Club’s spiritual home in Tottenham – the option known to be the fans’ favourite'.

The existing 36,000 capacity stadium has remained unchanged for over a decade and the club said it has 70,000 registered club members and a waiting list for season tickets of around 22,000 people.

'It represents a significant step in the growth of the Club, with a proposed stadium capacity of 60,000 and would provide state-of-the-art facilities, important public space, new jobs and homes and a significant boost for the local economy.

'We are at an early stage of what is part of our long term plans for the Club and now we want the views of local people and our fans.'

Councillor George Meehan, leader of Haringey Council, said: '“I am delighted that Tottenham Hotspur has confirmed its commitment to remain in our borough.

'We have always regarded Spurs as one of Haringey’s prime assets. They bring major economic benefits to our borough and carry out some excellent community work through the Tottenham Hotspur Foundation.'

In policy terms, the proposed development area is within the ‘Tottenham High Road Regeneration Corridor’ and identified in the Haringey Unitary Development Plan (UDP) as a 'major site for potential redevelopment to act as a “catalyst for prime regeneration.'