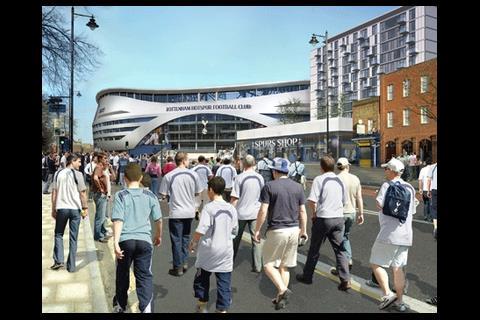 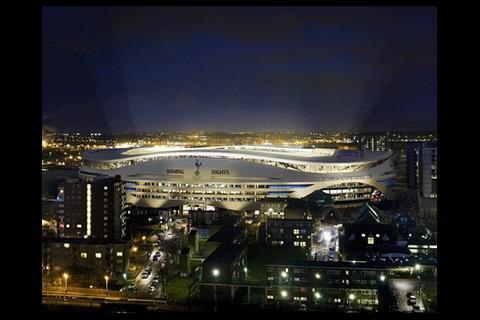 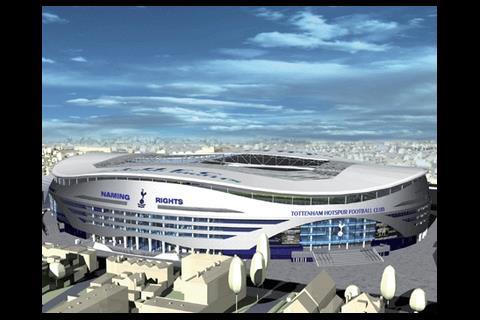 It has been designed by KSS and will also include a club museum, shops, homes and new facilities for the Tottenham Hotspur Foundation and important public space.

Club chairman Daniel Levy said: ‘The brief I gave the architects was to design an iconic stadium that would be one of the best in Europe. My over-riding priority is to re-create the terrific atmosphere we have at the current stadium, within a world class stadium that offers state-of -the-art facilities.

‘This means designing a stadium which has supporters as close as possible to the field of play and not simply looking to chase headline capacity. Our fans will find themselves closer to the pitch than at any other comparable stadium in the UK. This design puts fan experience first.

‘In addition to the stadium, we are designing great facilities within the overall masterplan that will add positively to the local environment and locality, components that can play a role in the regeneration of the wider area.’

David Keirle, chairman of KSS, said: ‘The key driver has been to deliver the best possible fan experience on all levels. The visuals of the new stadium show that it’s really seen as a building which responds to the brand, which we see as representing style and flowing lines of football.

‘We have spent a great deal of time looking at different roof formations.

'The roof has been designed to focus the noise back onto the crowd and onto the pitch. All seating is enclosed, there are no open corners, so everything is focused back onto the pitch and the acoustics will maximise the impact of the vocal support from fans.

'The stadium will have a roof that allows us to have four large screens up in the top corners, which means every spectator will be able to see a whole host of information.

‘The plans we have produced will result in close proximity for the fans to the pitch, we are going to be metres closer than other stadiums of comparable size. We are fine tuning the plans and these will ultimately determine the final capacity.’

The plans will enable the team to remain at the current site throughout construction.