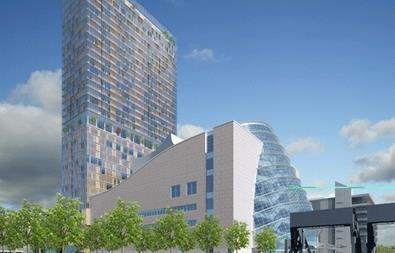 The hotel, which will be located on Dublin’s North Wall Quay, has been designed by Shay Cleary & Associates and has been developed in conjunction with the Ritz-Carlton Hotel Company which already operate Ireland’s first Ritz-Carlton Powerscourt hotel in Co Wicklow which was developed by Treasury Holdings.

Spencer Dock Development’s chairman of the convention centre Dermod Dwyer said: ‘The development of the hotel has always been a central part of the overall plan for the National Conference Centre.

It’s estimated that 200 events will be held each year in the NCC and with an iconic hotel as part of the NCC there is potential for many additional international conferences.'

John Bruder, chief executive officer at Treasury Holdings, said: ‘I hope that the plan will be warmly received by all concerned, including those who work and live within the city and that we can move forward with our plans to ensure that the development proceeds in parallel with the National Conference Centre.’