German institutional investor TRIUVA is closing in on a deal to buy the iconic Jenners building on Edinburgh’s Princes Street for around £55m. 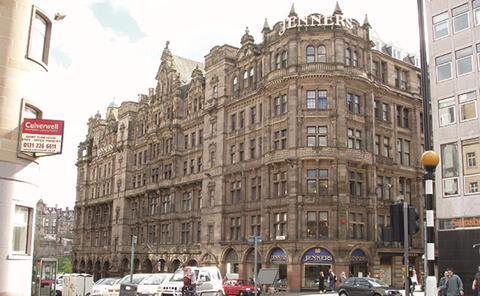 Jenners has been on Princes Street since 1838 - Source: Flickr/Stuart Caie/Creative Commons

The home of Scotland’s oldest department store was due to be brought to market with an asking price of just over £50m, but TRIUVA has pounced in with an offer ahead of the competition.

The building is let to Jenners with 23 years remaining on the lease and the prospective sale price reflects a yield of around 4.5%.

Jenners was the oldest independent department store in the world until House of Fraser bought the retail business in 2005. Following the deal, the building was sold to an Irish private investor for £37m.

“It’s an iconic building in the middle of Princes Street, so it’s prime Edinburgh retail,” one market source said.

“It’s an icon; it’s older than Macy’s,” another added.

TRIUVA has been particularly active in the Edinburgh market over the past year.

Returned to the market

Elsewhere in the city, Ocean Terminal shopping centre has returned to the market with the owner Resolution Property seeking offers of around £55m - £30m less than the initial price tag when it was first put up for sale a year ago.

Resolution has had the building under offer a number of times since at various price levels, including £65m in November, but the deals have all fallen through.

“It’s pretty tricky,” one market source said. “It had a BHS anchor and they haven’t been able to find another.”

The shopping centre is currently about 85% let.

CBRE is advising on the sale.