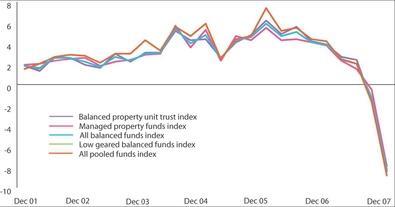 UK property funds suffered their worst quarter on record it was announced today.

The IPD UK Pooled Property Fund Indices (PPFI) delivered a total return of -9.1% for the three months to December 2007, the most negative performance since it began in 1990.

The PPFI out-performed the FTSE Real Estate Index, which returned -15.1%, but fell short of UK long dated gilds and equities which came in a 4.78% and -0.3% respectively.

But McVean said the bigger picture was more positive, with property fund returning 12.4% on average each year.

This out-performed gilts, equities and real estate equities which returned between 6% and 8%.

‘The ten-year results do demonstrate a key strategic role for this asset class within the longer term asset allocation plans of institutional investors,’ he said.

Residential funds were the best performers for the quarter, especially those focussed on student accommodation.