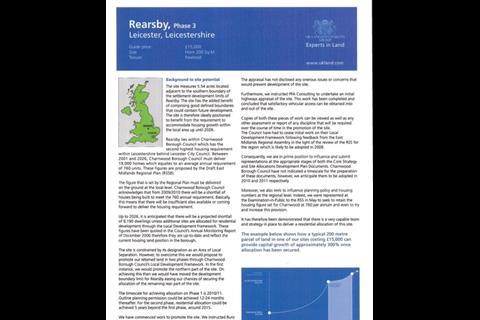 Don’t land bank on it: brochures show investors the benefits of investing with UKLI, such as a discount on future plots and 300% returns 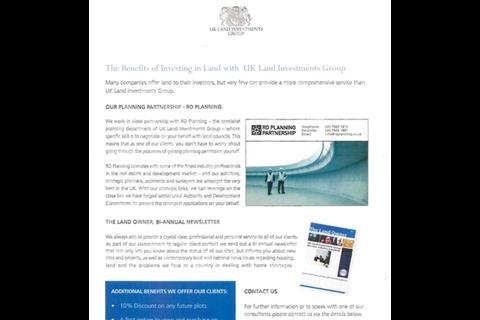 If you were offered a 300% return on a land investment, would you be tempted? How about if it was from the largest land banking firm in the UK, which claimed to be endorsed as ‘reputable’ by an MP?

Around 4,500 private investors certainly were. Drawn by the TV adverts and established credentials of UK Land Investments (UKLI), they handed over, on average, £15,000 each for 5,000 empty plots of rural land some of which are now worth as little £90.

But no plots ever gained planning consent – or look likely to. And Greg Mulholland, the same MP the company had claimed to be helping tackle ‘scandalous practices’ in land banking, ended up leading a campaign for its demise.

In April last year the Financial Services Authority (FSA) acted decisively against land banking companies by ordering that UKLI be wound down after ruling that it constituted an unregulated collective investment scheme.

It said the action should ‘serve as a warning to other companies that might be breaking the law in this way’.

Deloitte was appointed to liquidate the company and return the £70.8m that was owed to creditors, while Bally ‘Ballindja’ Chohan, the sole shareholder, was banned from holding directorship of a UK company for four years and moved to Dubai.

Property Week has discovered that more than a year after the Financial Services Authority (FSA) first clamped down on UKLI, another two land banking firms, Regents Land and St James’s Land, which are also owned by Chohan, managed to escape the ruling and still exist as solvent, unregulated companies.

Furthermore, Chohan continues to run an international operation, UK Land Investments International (UKLI), which is still marketing farm land in Kent as ‘Canary City’ that it claims is ‘destined to be one of the largest new urban centres in south London’.

Regents Land, which made £8.6m from selling plots on four sites, shared the same 150 staff as UKLI, when Deloitte began the liquidation process. Transactions and the process of promoting the purchased land to obtain planning permission ceased. It was rendered a ‘ghost’ company and left 1,000 investors in limbo.

The company phone number no longer works and none of the correspondence sent to its address by either investors or Deloitte have received responses – except through a UK lawyer. Companies House says all the Regents Land directors have resigned bar one: Dannyal Abdul Kader, who is based in Dubai.

Similarly, phones at St James’s Land’s listed in London address in Soho remain unanswered and its website has been disabled. Collective documents and reports from Companies House show a string of resignations from directors. The last appointed director at St James’s Land was Lukhbir Bains, a former UKLI statutory director.

Most investors thought they were buying land through UKLI, which in fact simply acted as an agent and carried out the sales process for Regents Land and St James’s Land.

Many still do not have documents that prove their purchase because the Land Registry stopped registering the transactions after failing to receive payment. Both companies still legally own some of the land bought in Leicestershire, Berkshire and Gloucestershire.

The FSA’s policy mean it was unable to confirm that it was investigating either company. However, a spokesman said: ‘Land banking and collective investment schemes are always on our radar.

It is illegal to run such a scheme without it being regulated by the FSA – and that is what we found with UKLI.’

Because the FSA has taken no action against these two companies, investors are powerless to recoup their cash. However, investors that bought their plots through UKLI have the option of returning them to the company and making claims as unsecured creditors, but even this does not look likely to provide much compensation.

Since it was appointed in Apri last year, Deloitte has struggled to liquidate assets to pay back the £70.8m UKLI owed to its creditors, among them HSBC, Clydesdale Bank and Cheval. This was because of the deterioration in the market and ownership issues. To date, it has only been able to sell a few UKLI properties and plots of land to farmers – the remainder are under offer – and has raised £1.7m.

But there will be slim pickings for unsecured creditors – particularly if the FSA rules that Regents Land and St James’s Land investors can also make misrepresentation claims, which would dilute the distribution further.

Despite having contacted all 4,500 people who bought the 5,000 plots that were sold, Deloitte says it has only heard back from around half of them.

‘We don’t know if they are aware of the situation,’ says a Deloitte spokeswoman. ‘The questionnaire we sent asked whether they would consider becoming unsecured creditors – and many probably don’t want to sell their land because they still believe that the land is worth what they were told.

‘It is beyond our remit to get involved with Regents Land, but it has been raised with the FSA, and we are continuing to advise people to get in contact with the FSA and local MPs. That is all we can do.’

Deloitte says that, if the FSA rules that either of Chohan’s other companies are also illegal, then it would invite the court to determine whether its investors had potential claims as unsecured creditors against UKLI.

But, given that it took the FSA two years to take action against UKLI, the hundreds of investors who bought through Regents Land and St James’s Land will not be holding their breath.