West End shopping Mecca to be 'pedestrian friendly' not pedestrianised. 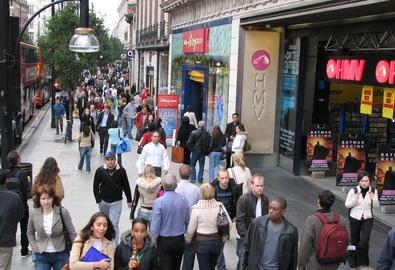 Wider pavements and street ‘oases’ will be brought to London’s premier shopping streets, Westminster City Council said today, but full scale pedestrianisation has been ruled out.

The triumvirate of Oxford Street, Regent Street and Bond Street will be given the £40m makeover in time for 2012 under the Oxford, Regent and Bond St (ORB) Action Plan.

But the council said banning transport from the retail mecca completely was impossible.

‘Our plans make the West End more pedestrian-friendly, while ensuring it retains the vibrancy and excitement which sets it apart from cloned malls not just in this country, but around the world.’

The ORB Plan has been formulated by Westminster Council, the New West End Company, the Mayor of London’s office and Transport for London.

The repaved streets will be widened to give up to 6ft of extra room.

There will be fourteen ‘oases’ which are areas set aside for al-fresco eating, public art and performances.

One oasis has already been completed at Old Quebec Street, reopened last November, following work in partnership with the Great Portland Estate, the Portman Estate, and the Cumberland Hotel.

The ORB plan will also bring in new lighting along the north side of Oxford and is promoting a crackdown on garish advertising and charity collectors.