Westferry Developments has doubled the proposed number of new homes in a newly submitted full planning application for its mixed-scheme development near Canary Wharf. 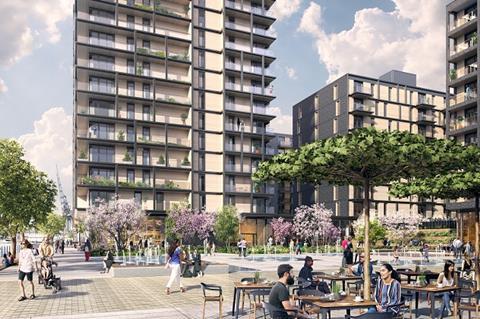 Initial consent was granted in 2016 for 722 new homes, but the full planning application for the former Westferry Printworks site submitted to the London Borough of Tower Hamlets now includes 1,540 residential properties to buy or rent. Of these, 35% will be affordable housing.

Northern & Shell-backed Westferry Developments said it made space for the extra homes by adding an additional building and increasing the height of those already planned.

Plans for the waterfront scheme in east London also include retail, workspaces, a secondary school and two new parks.

Mace development director Mike Myles said: “The submission of a new planning application for Westferry Printworks to the London Borough of Tower Hamlets is a real statement of intent that aligns itself with both the needs of the local community and the delivery of new and affordable homes for Londoners. We are extremely proud to be part of this flagship scheme that will contribute significantly to the enhancement of this area, whilst fully aligning with the London Plan.”

The scheme was given the initial go ahead in August 2016, when then-deputy mayor for planning Sir Edward Lister said it would provide “enormous benefits” to the area and regenerate a long-disused site.