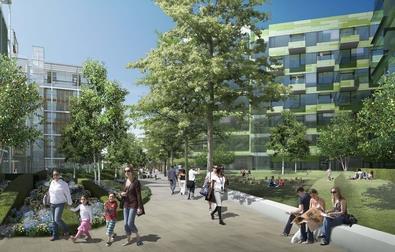 Westminster councillors were split last night over whether to recommend a complete overhaul of the plans for Chelsea Barracks or whether to consider the plans broadly acceptable.

The scheme, proposed by Project blue, the joint venture between Qatari Diar and Christian Candy’s CPC, was before Westminster’s planning and development committee for the first time last night for a steer over the proposed designs.

Councillor Alistair Moss, chair of the committee, said the proposals for a 638-apartment development needs to be ‘a microcosm of how we would like Westminster to be if we had a blank canvas.’

Commenting on the design of the apartments blocks by Roger Stirk Harbour & Partners he said: ‘I think the applicants have gone a long way to addressing what would be suitable on that site.

‘It is a bold style which has been carefully considered and I believe it is an appropriate response.’

Three other members of the six person committee agreed with Moss. However, councillors Angela Harvey and lee Rowley disagreed.

‘There are so many examples from around the world of developments that sit within the community but also inspire the community,’ said Harvey. ‘I think this could be so much better.’

Completely out of keeping

‘We are trying to create a microcosm of what we would like Westminster to be like,’ said Rowley. ‘These designs are completely out of keeping with the beautiful buildings in the area.’

He said he feels the design need a complete overhaul to be satisfactory. At the meeting the planning committee agreed that several blocks in the development need to be scaled back to protect views, particularly from the grade I listed Royal Hospital.

‘We’ve listened to the comments and feedback received at last night’s meeting,’ said CPC’s Christian Candy. ‘We are pleased that the comments expressed by last night’s planning steer meeting are in majority favourable towards the scheme.

‘As to the opposition to the scheme, the Westminster City Council report highlights that just 77 letters of objection from adjoining owners or occupiers were received representing a 2% oibjection from the people the council consulted.’

Concerns were also raised over the amount of public space available in the scheme.

The three and a half hour meeting was attended by representatives from Qatari Diar, Candy & Candy, development managers on the scheme, and CPC, including Christian Candy.

It was also attended by representatives of the Belgravia Resident’s Association, which objects to the scheme.