Westminster sends 'hideous' hotel plans back to drawing board 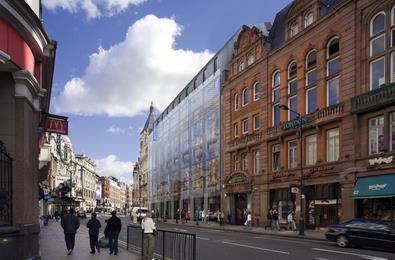 Asif Aziz’s plans for a 503-bedroom hotel at the Trocadero in London’s West End were branded ‘hideous’ and ‘of no aesthetic merit’ as Westminster Council recommended he go back to the drawing board.

Westminster Council planning officers had recommended approving the £100m overhaul of the site at Shaftesbury Avenue near Piccadilly Circus.

But at a three hour planning meeting last night councillors deferred their decision on the scheme for Aziz’s Criterion Capital to modify designs.

‘As a city council we would very much like to see the Trocadero improved and enhance,’ said committee chair councillor Alistair Moss. ‘But in terms of this application I think it would be useful if we could solve two issues.’

Councillor Moss said the height and bulk of the scheme, which was said to damage views from Chinatown, needed to be addressed.

The metal clad sloping roofs of the proposed three towers of the new Ibis hotel were criticised by councillors because of this impact on the views and the materials used.

A new glass façade onto Shaftesbury Avenue, which would be used as a ‘blank canvas’ for some public art, was also rejected and branded ‘hideous’ by one councillor.

The plans were also sent back because, under council rules, a development of that size needs to be offset by a provision of housing.

Criterion has provided a site for housing, at Villiers Street next to Charing Cross station, but concerns were raised about the amount of housing being supplied and the impact of the local nightlife on families housed there.

The decision is a victory for English Heritage, Shaftesbury Plc and the Westminster Society who all opposed aspects of the scheme.

Aziz, who sat through the full planning meeting after flying back to the UK from a holiday, shrugged after the decision and remarked: ‘What can you do.’

Sheppard Robson was architect on the facade of the proposed scheme, Dexter Moren was responsible for the hotel's internal architectural work.