Husband and wife Steve and Arlene Carrick have been named Points of Light by prime minister David Cameron for founding and running a testicular cancer research charity in honour of their son. 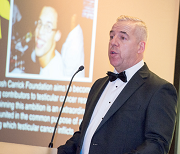 Points of Light is a not-for-profit organisation dedicated to promoting voluntary effort to solve social problems.

In 2010, Steve and Arlene’s 22-year-old son Josh was diagnosed with testicular cancer. After graduating with a computer science degree, he was about to start work at IBM, but the cancer took his life 12 months later.

To honour his memory, his family and friends set up the Josh Carrick Foundation in 2012.

Steve (pictured), a marketing director at Savills, and Arlene, an administration officer at Luton Borough Council, are the 496th and 497th winners of the award.

“Steve and Arlene have shown tremendous strength in creating the Josh Carrick Foundation in memory of their son to fund research into testicular cancer,” said Cameron.