Rich Clark predicts who he thinks will make it into the 2020-21 PFA Team of the Year, as well as making his picks for Players’ Player, Young Player, Manager and Goal of the Season.

What do the following clubs all have in common from the Premier League this season?

All 12 have won more PL away games than home.

In the previous three seasons combined, this had happened twice:

Most appearances in PFA Team of the Year

Most players from one club in PFA Team of the Year 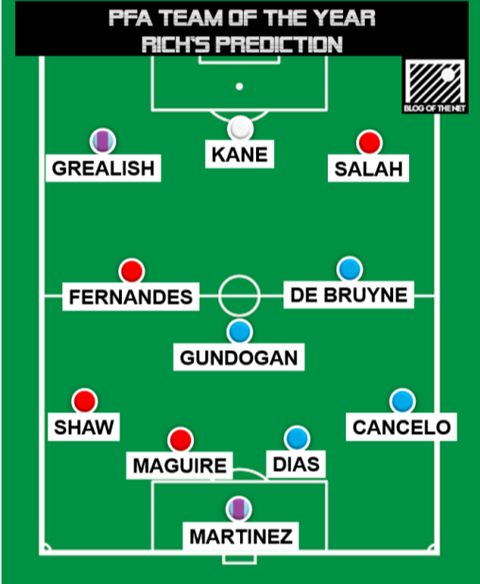 PFA Team of the Year predictions and statistics

‘Net xG (expected goals) prevented’ is the value of the chances faced (xG against) minus actual goals conceded. Martinez has the highest number in the league this season, keeping out seven more goals than expected.

Goalkeepers who are kept more busy often show up well on this metric, but above average shot-stoppers will also show up on their own merit.

James Justin started each of the first 23 PL games; 11 at left-back, five at right-back, once at centre-back and six times as a wing-back.

Aaron Cresswell managed 8 assists across the season, four each from appearances at left-back (20) and centre-back (15).

Timothy Castagne has started 11 PL games at right-back, three each at left-back and centre-back, whilst nine appearances have come at wing-back.

‘Tackles minus dribbled past per game’ (not shown) measures how many tackles a defender made in a match, minus the number of times that defender was dribbled past. Aaron Wan-Bissaka, with 2.3 per game, has the highest average in the PL for a full-back.

Tackles and interceptions per game always favours defenders under lots of pressure in games. Wesley Fofana stands out next to Johnny Evans as perhaps showing more aggression, or possibly having to recover more from being out of position. Blocks and clearances are a similar story. Treat with caution.

Liam Cooper of Leeds has the most tackles and interceptions per game, with 5.2.

Before his injury, Harry Maguire’s 11 yellow cards was the most in the PL – he’s now joint second. At the top is Aston Villa’s John McGinn, who managed five yellow cards in his final five games to take his total to 12.

Here are the more traditional central midfielders. Gundogan played higher up a lot more and from 15 December to 13 February scored 11 goals in 12 PL games.

James Ward-Prowse, Pierre-Emile Hojbjerg and Tomas Soucek are the only outfield players to play every PL minute.

Here are our attacking midfielders, some of which crossed over into the forward section.

Mason Mount’s expected assists are 4.4 higher than his actual – indicating poor finishing from his chances created.

Jack Grealish’s 3.2 key passes per game – passes that led to shots – is the most in the PL.

Harry Kane is clear for non-penalty and total goals to win the Golden Boot. He finished up with 19 non-penalty goals.

Kane are Heung-Min Son are in the top two for ‘assist to goalscorer’; Kane has assisted Son nine times, Son has setup Kane five times.

Jamie Vardy’s non-penalty expected goals is 6.0 higher than his actual, telling us he’s not finished the good chances he’s had.

Goal of the Season

Read more from Blog of the Net