Last year’s tweeting tirade against the media aside, Prince Andrew is not usually known to be in the same class as his father Prince Philip for making gaffes at public events. 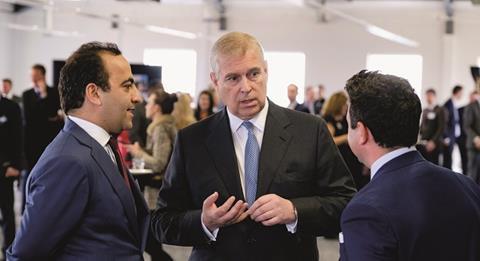 However, having opened the new Humber Enterprise Park at Brough, near Hull, last week, Prince Andrew let slip his thoughts on the property industry when speaking to guests.

With the regeneration site being developed by LC Industrial, a joint venture between Leeds-based developers Citivale and LRE Capital, the Duke took a moment to talk to LRE’s managing director Sassan Ahsani or, as the prince called him, “the man with the money; the go-to guy”.

Despite having provided the financial backing for the Humberside regen, Ahsani modestly told him he “wasn’t really the top man” at the party. Taken aback by the self-effacing Ahsani, Prince Andrew quipped that he’d “never known such humility from somebody in the
property industry”.

He obviously doesn’t know anyone in the industry - as anyone who attended this week’s Property Awards will attest, the big winners were all humble. They always are.