It was perhaps inevitable that investor demand would surge in the commercial property auction room once society began to see a way out of the pandemic and back towards normality. 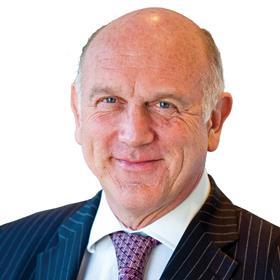 However, the extent of pent-up demand has been unexpectedly substantial, driving transaction volumes to record levels in the UK auctions market in the second quarter of 2021.

The tech platform on which our auctions are now conducted came of age in the first half of this year. The ease of access and convenience of our live-streamed auctions has been enthusiastically adopted by those who wish to invest in commercial property.

Heading into the second half of the year, demand from private investors should remain on a continued upward curve as an increased universe of buyers targets lots offering both secure income and asset management potential.

Unsatisfied investor demand for mainstream commercial property assets has prompted a growing number of sellers to bring properties into the auction room. These sellers have included international investment and asset managers, as well as corporate occupiers wishing to use capital more productively in their core businesses through sale-and-leaseback deals.

The main driver for the strong Q2 2021 performance was retail assets, which, with 263 properties sold, accounted for 74% of the sales total.

The sector has seen significant falls in the value of high street shops and shopping centres and this has made some sellers cautious about exposing assets to the market where a sale might show a significant mark-down on valuation.

Of course, past valuations do not reflect today’s rents, the true financial status of the tenants, or the ability to let a property, so have almost become academic in their relevance – but are still very pertinent to debt secured against an asset and the potential for an exit route. 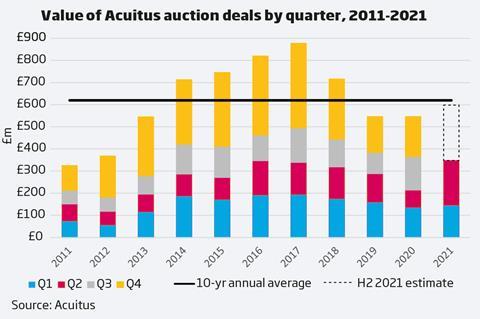 In this context, the vertiginous falls in shopping centre asset values have attracted most publicity, but even in that sector, there has been sustained investor demand for assets that are deemed to have continued relevance to their catchment and may offer a repurposing angle.

On the high street, where shops have been re-let or leases have been renewed at rebased rents, buyers are increasingly seeing them as investable stock. However, this does not apply to the vast number of over-rented stores often let to national multiples that are heading for a CVA.

The majority of retail investments offered for sale in Q2 were straightforward neighbourhood shops let at sensible rents to occupiers that provide for local needs, such as pharmacies and healthcare, supermarkets and bank branches with alternative use/residential potential.

The most sought after of all retail investments are neighbourhood parades where tenant risk is diversified and asset management opportunities, such as a possible change of use or residential redevelopment, offer the chance to add value.

We expect commercial property transaction volumes to grow as the economy and business confidence continue to recover, although the pace of this will depend on a number of factors.

Loosening the grip of the pandemic, a resumption in GDP growth and the continued political impact of Brexit are all major factors in a return to economic stability.

In this situation, it is not easy for an owner or lender to know what is right and finding a solution may take time.

All in all, assets that provide for the day-to-day needs of a local population such as supermarkets, convenience stores and pharmacies have been popular this year and will continue to be in demand going forward.

Edit: The graph represents the total commercial auction figures across all of the UK CRE auction market, not the value of Acuitus deals.