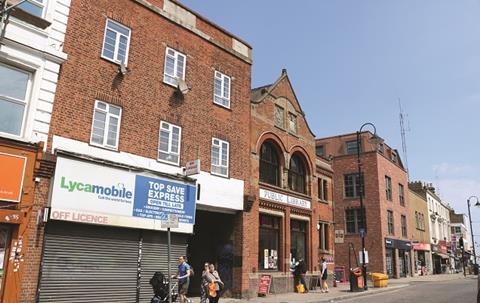 Barnett Ross’ star lot was a three-floor terraced building in Norwood which sold for £920,000

The four lots that did not sell, as well as a further five that were withdrawn prior to the auction, were all residential properties.

Commenting on the sale, Jonathan Ross, auctioneer at Barnett Ross, said: “It is clear that a further price adjustment will be needed in order to encourage more interest in residential at our next sale.”

However, he maintained that the sale was “another great day for the commercial market” with demand “soaring for fresh stock at sensible reserves”.

The star lot was a three-floor terraced building in Norwood, south London, arranged as a ground-floor shop with flats above. Guided at £500,000, it sold for £920,000, receiving more than 40 bids.

Fellow London auction house Strettons also held an auction last week (16 July), where it recordedits lowest success rate so far this year at 59%. It raised £7m, selling 25 of the 43 lots on offer.

However, both the total and success rate were slightly up from the £6.8m and 58% achieved in July last year.

The largest lot to go under the hammer was a two-floor house in Walthamstow arranged as three flats and an adjoining garage with planning permission for a three-bedroom house. The house and the garage were offered as two lots but sold jointly for £1.1m.