Journalists like a good hook, but Canary Wharf Group took the concept to a whole other level at its Winter Lights Festival this week, when it adorned a tree on its estate with illuminated bras. 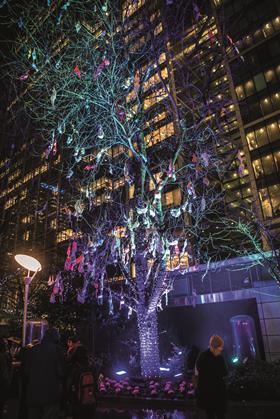 One of 26 installations for the event, The Bra Tree apparently hails from an American skiing tradition of women launching their brassieres into nearby trees. It’s a bit nippy for such stunts in Eye’s view, but hey-ho.

Canary Wharf Group says the aim is to raise both “a smile” and money for its chosen charity Breast Cancer Now, with contactless donation points available nearby. So if you haven’t already, this is one occasion on which it probably is worth making a tit of yourself.

The good news is that the large crowds that have descended on the sixth annual Winter Lights event, which runs until 25 January, show it has already been anything but a bust.