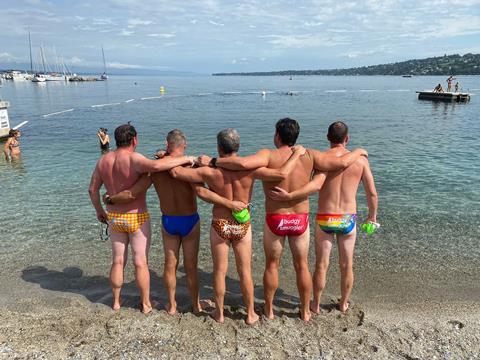 Three teams of aquatic athletes drawn from across the property industry have raised almost £100,000 for charity by swimming across Lake Geneva.

The challenge is known for its chilly temperatures and daunting prospect. Only eight people have ever completed the course alone, and only 12 relay teams had managed the feat before. The English Channel, by contrast, has been swum thousands of times.

Three teams of five swimmers took part – dubbed LakeLords, Broker Buoys and Ladies of the Lake. Team members swam in hour-long stints to cross the water, without the benefit of wetsuits.

Swimmer Tracy Collins, a partner at Montagu Evans, says: “After circa 75km of swimming the Broker Buoys (my team!) finished first in a time of 26 hours and 58 minutes, just five minutes ahead of the Ladies of the Lake.”

He adds that third-placed LakeLords veered off in a vain search for favourable currents and finished in just under 29 hours.

The beneficiaries are Muscular Dystrophy UK, cancer charity MacMillan, First Touch and the Charlie Waller Trust. Donations can still be made via www.geneva70.co.uk.