Stories about wealthy property developers ripping off London residents are two a penny these days. 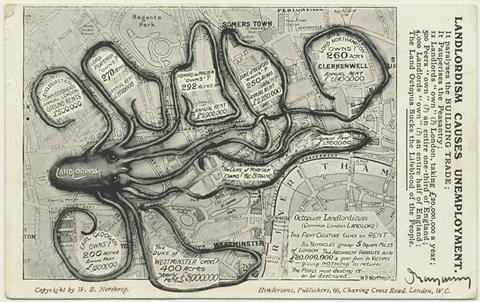 However, the ‘tentacles of capitalism’ were ‘strangling’ tenants in the landed estates of Westminster and Mayfair more than 100 years ago as this postcard (pictured), which is being sold by Altea Gallery at the London Map Fair next month, reveals.

The card, designed by social justice campaigner William Bacot Northrop, depicts the ‘Landlord Octopus’, which is blamed for causing unemployment in the capital. The card reads: “It paralyses the Building Trade; It Pauperises the Peasantry; 12 Landlords ‘own’ London, taking £20,000,000 a year; 500 Peers ‘own’ an entire one-third of England; 4,000 landlords ‘own’ an entire half of England;

The Land Octopus Sucks the Lifeblood of the People.”

The cartouche to the bottom right of this compact socialist pamphlet reads: “Octopium Landlordicuss (Common London Landlord). This Fishy Creature lives on Rent. Its Tentacles grasp 5 Square Miles of London. This Absorbent Parasite sucks £20,000,000 a year from

its Victims – giving Nothing in return. The People must destroy It – or be destroyed.”