Corbyn Clause’ not first time a deal has hinged on an election outcome. 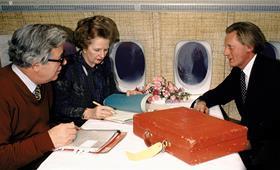 Last month, Metropolis reported on a strange rumour doing the rounds about an international conglomerate searching for around 40,000 sq ft of office space in London that has insisted on inserting a ‘Corbyn Clause’ into any deal it strikes with a landlord.

It is understood that the tenant wants a guaranteed rent reduction should Corbyn get the keys to No. 10.

As bizarre as this clause might sound, Metropolis has discovered it is not without political precedent. Neil King, from Alex Neil & Co, says he encountered a similar thing back in 1987 when he was instructed to sell 2 Hyde Park Street – an apartment development overlooking Hyde Park – by Rosehaugh Copartnership.

He recalls that Mountleigh Estates made an offer for the development that was conditional on Margaret Thatcher winning the 11 June election against Neil Kinnock.

“The night of the election I watched the results until 5am and then staggered to bed,” says King. “The next day – Friday 12 June – contracts were exchanged at 10am with completion shortly after.”