2019-20 Premier League team of the season based on stats

Here we’re looking at the Opta stat leaders for every position in the Premier League from 2019-20 to make up our team of the season. Included are clean sheets, tackles, interceptions, passes, assists, goals and many more. Several lead the way in more than one area too. 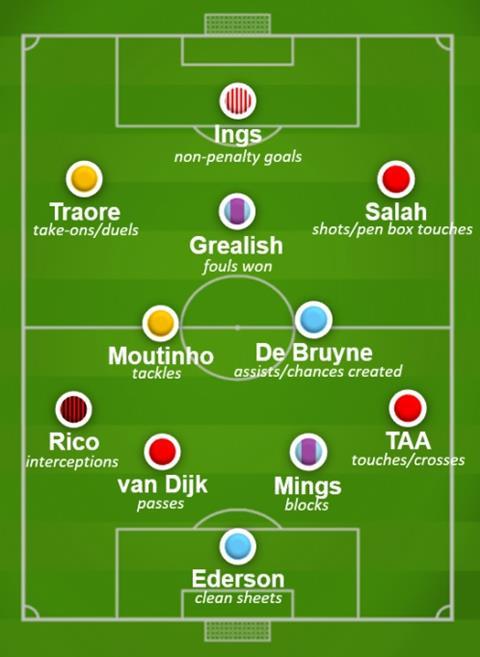 Some believe he’s behind a terrible Manchester City defensive unit, though only Liverpool conceded (2) fewer goals this season. If he is behind a poor defence then it’s all the more credit to the Brazilian. Largely, the situation is exaggerated and City’s ‘goals against’ column is telling but Ederson has had another strong season.

At 21, he’s played in two Champions League finals – winning one – has a Premier League winners medal, been to a World Cup and is chief creator, from right-back, at one of the most dominant teams in the world – for which he also had the medal to prove.

He averages 1.1 touches per minute and 104 per start he makes. Those crosses have also helped him to 13 assists (second best in PL) this season. He’s special.

This particular metric is always favoured towards teams – and players – who have more defending to do. It makes sense that an Aston Villa defender will have more opportunity to block a shot than a Liverpool player, for example. James Tarkowski is Mings’ nearest competitor here, with Ben Godrey, David Luiz (loves a lunge) and Lewis Dunk also in the picture.

Given this is Villa’s style and situation, Mings has been the best at it and certainly a big help towards their survival.

Much like you’d expect a Villa defender to be defending a lot, a Liverpool centre-back sees a lot of the ball and is expected to deliver on it. The Dutchman’s 89% pass completion rate is high and leads the way for most passes as well as the most successful completed too.

After winning 2018-19 PFA Player of the Season, it’s almost like this past season he’s been overlooked for the top awards. He’s started every game, scored five goals, been a part of 15 clean sheets and barely put a foot wrong for the champions. He remains the very best around in his position.

The 27-year-old has made 27 starts and yet has more interceptions than anybody else. He plays on the front foot and has four assists as well this season, creating 1.2 chances per game from left-back. He should be one of a few Bournemouth players who will be picked up following their relegation.

Here we have one of the most underrated players in the Premier League and just one of the reasons for Wolves’ recent success.  Moutinho just does everything very well; but in particular he breaks up play and passes the ball superbly – he’s also sixth this season for chances created.

He turns 34 in September, but is a key player for Wolves. For many years he was thought of as a player expected to score more goals and grab lots of assists; many didn’t seem to know what kind of player he is. Quite simply, he’s a really good one.

Feel free to have a favourite stat that De Bruyne leads the way in, as there’s four key ones here. He’s laid on 45 more chances than any other player. Good ones, too: 33 big chances created is 15 more than anyone else and 20 assists is the (joint) Premier League all-time record. He does it in dangerous areas too, as his final third passing is also top of the pile.

In this guy, the Premier League are witnessing the best player in the world. Enjoy it.

After much unfair criticism for several years, his four goals and nine assists have seen him have his best Premier League season to date.

Graeme Souness thinks Grealish has been fouled the most because he holds onto the ball too long. Maybe he does, though his alternative is to pass to an Aston Villa team-mate, so… Ok, that’s harsh. Grealish hasn’t been dispossessed a great deal of times – Wilfried Zaha has been tackled almost three times more often – and often the way to deal with him is to foul, either through frustration or tactically when there’s a promising attack. Simply, players who win fouls are doing good things.

167 fouls won is 47 more than anyone else this season, which is a lot.

Generally, players who take the most shots are in the conversation for scoring the most goals. It’s a more difficult skill than often perceived but finding time and space is one of the hardest things in football – and Salah is great at it.

He’s had 14 more shots than anyone else, 17 more inside the box and 20 more penalty area touches than his closest rival. Another healthy goal tally was his reward. Oh and the small matter of being a Premier League champion.

Avoiding the long debate about why a penalty goal is worth less, Ings isn’t Southampton’s regular penalty taker and given the average success rate of penalties (76%) it is just a greater chance to score a goal. Ings realised this late on in the season and began taking them for Southampton, adding one to his tally but falling one behind Jamie Vardy overall – who scored four times from the spot.

No player has more open play goals and Ings was ninth for most shots and eighth for shots and touches inside the box. He’s had an elite season at a mid-table club. Only his injury record will be putting off potential buyers.

Read more from Blog of the Net