At this year’s Mipim, the usual throng of council leaders were joined by a larger-than-usual number of central government representatives. 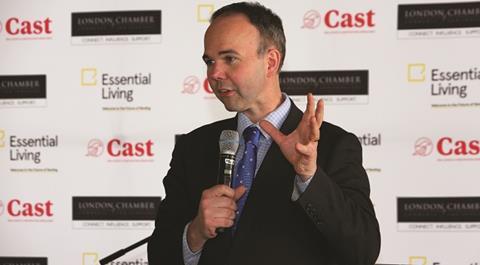 Ministers, senior officials and regional champions rubbed shoulders with the property elite at the government’s own stand.

The contingent was led by housing and planning minister Gavin Barwell, who was keen to talk about the impact of the recent housing white paper.

At a lunch organised by build-to-rent (BTR) developer Essential Living and consultancy Cast, Barwell gave a speech laying out his priorities and his views on renting and construction across three key areas

“If you’re experiencing problems [with councils], one of the things I’m really passionate about is that, once we’ve finished the [BTR] consultation [in the white paper] and set the policy nationally, I want to hold policy constant for two to three years. Everyone says to me that the government constantly chopping and changing policy doesn’t help anyone to build any new homes, so I want a period of consistency.

“I want to spend my time engaging with individual places, finding out what the blockages are and trying to help unblock them. So if you’re experiencing local authorities saying they don’t want to build your kinds of homes, I want to know about it so I can have a word.”

“PRS is now the second-biggest form of tenure in our country. There are increasing numbers of families living in it and there is a problem with lack of security. Therefore what is really attractive about BTR is that institutional investors can offer longer-term tenancies than someone like me could offer if I were renting a spare room out, and that can begin to disrupt the market and change it in
a way that can be really helpful.”

3) The merits of modern methods of construction

“I think that these can work right across the housing industry but my sense is that BTR and the housing association sectors are the two sectors most likely to adopt them first. This is because they are two areas where there are real advantages to investors if we can speed up getting the total volume of stock on site and generating return.

“Not only are modern methods of construction helpful in their own right but also in terms of encouraging change in how we build homes in this country. Most of the homes we build at the moment are done so roughly the same way as 100 years ago, so this change has been overdue.