These are uncertain times for the residential market. House price growth is petering out and prices could well start to fall if the economy slows ahead of Brexit and rising inflation puts pressure on household finances.

But many in the build-to-rent (BTR) sector believe it is immune to much of the uncertainty and set for a strong showing in 2017. So is that confidence justified?

Momentum certainly seems to be gathering behind BTR. Simon Durkin, head of UK research at BNP Paribas Real Estate, predicts that “real incomes will be squeezed this year” as a result of the economic uncertainty, making homes for sale even more unaffordable despite stalling house prices. This could bode well for BTR developers and investors, he suggests.

“People need somewhere to live and there’s a desire to live in cities, so the fundamentals for the PRS seem to be strong,” he argues. “Affordability of rents is where I think there is still some growth, more growth than the for-sale market.”

His comments are echoed by Tim Phillips, director of Lothbury, a boutique investment management firm that invests in all sectors.

“Any time that there’s uncertainty on the horizon, people don’t want to make large purchasing decisions,” he says. “That’s what happened in the US in the last recession - some people left their homes and mortgages or put off buying decisions.”

That could lead to an increased demand for rented product, he adds. “It’s an opportunity for BTR to come in.”

When we deliver professional PRS into the market I think people will see something they’ve never seen before - Tony Brooks, Moda Living

Tony Brooks, managing director of BTR developer Moda Living, believes the fundamentals remain stronger in BTR than in the for-sale market and that it is therefore “insulated” from some of the uncertainty. When potential renters see stock completed this year, demand
for the sector will only increase, he predicts.

“There are a whole lot of things going in our direction at the moment,” says Brooks.

“You’ve got a whole series of challenges for first- and second-time buyers [including] difficult mortgage rules. When we deliver professional PRS into the market I think people will see something they’ve never seen before.”

However, the BTR sector still faces some challenges, including attracting investors to the market and persuading them of the potential for rental growth.

Some investors are being put off by a lack of available data about the future of the sector, according to Lothbury’s Phillips. He is particularly focused on bringing money over from the US at the moment, which he says is not an easy task. 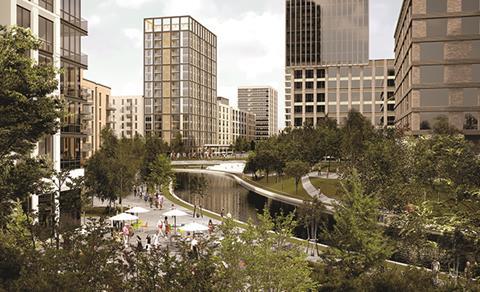 US investor Greystar has a BTR vision for Greenford

“[There’s] uncertainty in the product and resulting yield,” he says. “There’s a difficulty around that. What a lot of the investors are doing is being careful. A US investor is not going to come to the UK, get into the market and do cross-border investment and due diligence for just one deal. Most of the investors we speak with are looking for a pipeline of £500m or more.”

Durkin backs up his point. “One of the difficulties with professionally developed and managed PRS is that it’s emerging,” he says.

“It’s a new sector. There is very little historical evidence you can refer to to give you an idea of how that market will behave. It’s not like the office or logistics market.”

He adds that Brexit negotiations could have a major impact on the sector if immigration from Europe is curbed and the demand for rental product falls.

For now, though, the sector is in a good position and deals are being agreed every month, so while challenges remain, expect interest in BTR to continue to develop.