Against a fake brick-wall backdrop, Theresa May set out her vision for tackling the housing crisis at the National Planning Conference in London on Monday. 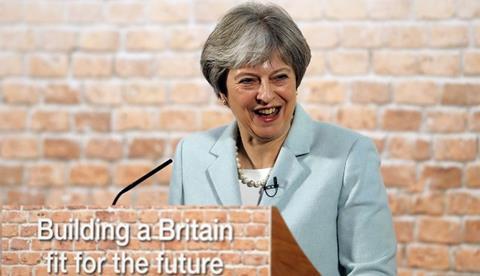 The speech was timed to coincide with the first review of the National Planning Policy Framework (NPPF) in six years. Spanning 70 pages, the draft document posed 43 questions for consultation.

Here are five key takeaways from May’s speech and the NPPF review.

After reading @SamJPartington1's 5 takeaways from Theresa May’s speech and #NPPF review (https://t.co/IqJ0pVmjvH) give us your views in our weekly poll:
Did Theresa May strike the right tone in her speech on housing this week?

The government has only just started work on a review into land banking, but May made her own views clear in her speech. “I want to see planning permissions going to people who are actually going to build houses, not just sit on land and watch its value rise,” said May. The prime minister wants councils to blacklist developers with a poor history of not building on sites where planning has been approved.

The NPPF review also contained proposals that will heap pressure on developers. In particular, by restricting the use of viability testing, it will become harder for developers to negotiate down their affordable housing contributions. May said it was “totally unacceptable” that developers should be able renege on promises.

Proposals to reform the system of developer contributions to infrastructure and affordable housing were launched alongside the NPPF review, designed to simplify, speed up and improve the transparency of the process.

In the wake of the furore over the giant pay package for Persimmon’s chief executive Jeff Fairburn, May was critical of the way housebuilder chief executive bonuses are calculated. “The bonuses paid to the heads of some of our biggest developers are based not on the number of homes they build but on their profits or share price,” she said. “In a market where lower supply equals higher prices that creates a perverse incentive, one that does not encourage them to build the homes we need.”

The government also turned up the heat on local councils. One of the most significant changes in the NPPF is the housing delivery test, which was trailed in the housing white paper last year. Under the reform, councils will be held to account for the number of new homes delivered in their areas, not just the number planned for. “It will put councils under pressure to deliver more homes or face the prospect of developers getting the right to ‘build any time anywhere,” says Ian Anderson, a partner in Cushman & Wakefield’s planning and development team.

Build-to-rent made four appearances in the framework – an encouraging sign for the tenure, says Ian Fletcher, BPF director of real estate policy.

“The NPPF suggested local authorities should be breaking down their housing need to a more detailed level in their local plan-making process, taking into account rental [homes]; it defined build-to-rent and changed the term ‘discounted market rent’ to ‘affordable market rent’,” Fletcher says. “It also clarified that build-to-rent developments do not have to include affordable homes for sale, which is a requirement for other large developments.”

The framework keeps in place robust protections for green-belt land and defines the criteria that must be met before changes are made to green-belt boundaries.

However, a subtle change in wording could have a positive impact on affordable housing development. “Revisions to the green belt have the potential to be one of the largest changes to the policy in many years,” says Jason Lowes, partner in the planning team at Rapleys.

“Reforming the language of the NPPF to allow for residential development that contributes to local affordable housing on brownfield green-belt sites, so long as it doesn’t cause substantial harm, looks like a sensible reflection of the fact that much green-belt land isn’t actually green.”

The consultation on the NPPF reform will run until 10 May. A final version of the framework will be published this summer.