A Berlin-based pension fund for German doctors and chemists is buying a major office and residential development in London’s Victoria for close to £210m. 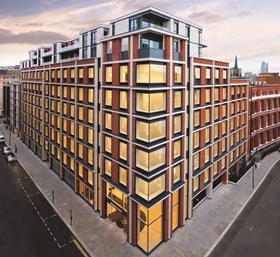 1-5 Howick Place was put up for sale by private equity firm Doughty Hanson and Urban & Civic in November for £205m at a yield of 4.7%.

Property Week understands the building (pictured) is now under offer to CBRE Global Investors, which is believed to be acting for the fund Verwaltungsgesellschaft für Versorgungswerke (VGV).

The deal comes after VGV agreed to buy its first regional asset with the purchase of 7, 8, and 10 Brindleyplace in Birmingham for £130m earlier this month.

Howick Place, which is majority-owned by Doughty Hanson, comprises just over 143,000 sq ft of commercial space and 23 luxury residential flats.

High-end fashion brand Giorgio Armani has its headquarters in the building, while Dong Energy occupies 81,000 sq ft over five floors.

The deal with CBRE GI and VGV adds to a recent slew of investment deals in Victoria as investors seek to buy into the fast-changing area.

Traditionally a government office-dominated location, Victoria is evolving into a high-end mixed-use district, with the transformation driven by Land Securities’ major redevelopment of Victoria Street.

Already this year, hospitality giant Whitbread has snapped up two buildings for hotel conversions - 21 Tothill and 15 Dacre Street - while Threadneedle Investments is under offer on £100m Neathouse Place.

CBRE acted for the vendor. JLL acted for CBRE GI. All parties declined to comment.