Homing in on key issues at #RESIdebate

To set the scene for next month’s RESI Conference, @propertyweek and Savills’ head of residential research @LucianCook took to Twitter to debate some of the biggest issues facing the sector… in 140 characters or fewer.

Using the hashtag #RESIdebate, more than 40 industry figures posed their questions on a range of topics including stamp duty’s effect on the market, how we can accommodate our ageing population and the role of proptech.

The hour-long debate on 17 August clearly resonated with participants: it generated 1.7 million impressions across more than 100 tweets. Then again, there were some big questions to address, not least: is it possible for a housing market to work for everyone? 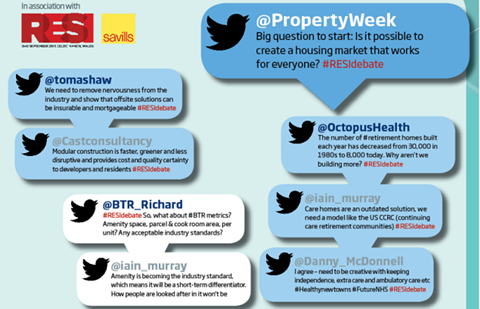 Cook noted that the market has become increasingly challenging in recent decades as the wealth gap between generations has expanded. The wide-ranging debate went on to cover issues such as the sustainability of the private rented sector (PRS), the viability of modular construction and even whether robotics could be a part of the solution.

There was agreement that any fix to the housing crisis would need to be multi-faceted. “We need to address the shortfall in PRS supply and the need for more retirement housing, accepting the realities of mortgage regulation,” said Cook. “Housing associations will also have a significant part to play.”

Our recent survey of HAs suggests that they will have a significant part to play in address the housing crisis #RESIdebate pic.twitter.com/xXjfXjrd4Q

No doubt it creates big inefficiencies but the receipts keep going up and the 3% surcharge is a real revenue raiser pic.twitter.com/oQ83q9wgAM

Lenders assurances re repairs key. @landg_homes suggested new “certificate of quality” would get the big lenders on board. #RESIdebate https://t.co/cr0pUfGKc0