Housebuilders’ shares took a battering on the markets following the EU referendum, with the sector tanking 36% in value in two days’ trading, but shares have since rallied following a series of positive trading updates and signs the government is prepared to boost housebuilding. 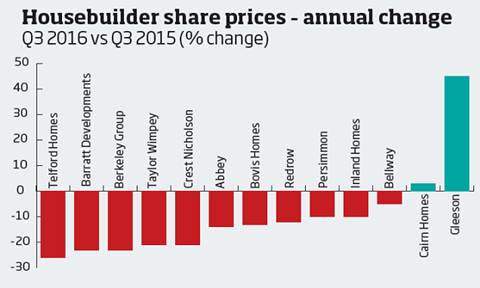 According to consultant Building Value, while housebuilders’ shares at the end of Q3 were still 15% down on pre-referendum levels, they were up 18% on Q2, as all the listed builders – apart from McCarthy & Stone – started to bounce back following the referendum.

Gleeson led the way with a 40% uplift in its share price in Q3, followed by Redrow and Crest Nicholson, which both saw their share prices rise 27%, and Persimmon, which posted a 25% increase. Abbey, Telford and Berkeley lagged behind with rises of less than 3%. 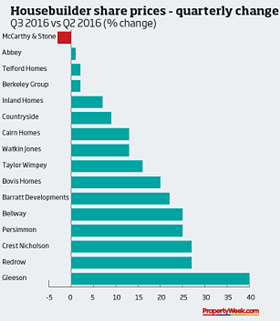 The decline in Berkeley’s share price following the Brexit vote has seen it drop out of the FTSE 100 leaving three housebuilders – Barratt, Persimmon and Taylor Wimpey – in the blue-chip index. These three account for 36% of the housebuilding sector’s total market value.

Tony Williams, chief executive of Building Value, says the market overreacted to the Brexit vote and the sector rallied in subsequent weeks as many of the worst predictions, such as a sharp fall in sales, failed to materialise.

He adds that the sector was also buoyed by some strong results during the quarter and bullish statements from housebuilders, which noted the limited impact of the EU referendum results on sales.

‘Not out of the woods yet’

There were four sets of full-year results in Q3, from Abbey, Redrow, Barratt and Gleeson. Average pre-tax profits across the four rose by 20% year on year, while revenue increased 14% to £18.6bn and average profi t margins edged up from 19.4% last year to 20.1%.

However, Williams cautions that the sector is “not out of the woods yet”, and could be hit again as the UK begins the long and difficult process of extricating itself from the EU. 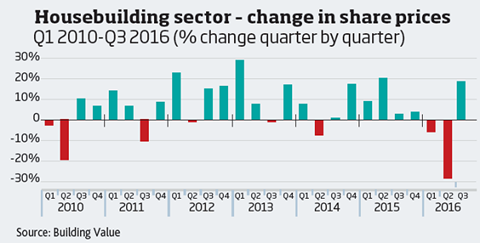 “Brexit is not over – not by a long chalk,” he says. “The housebuilding sector is vulnerable to potential negativity over the near term.”

Certainly, looking at the year-on-year performance the picture is less positive: only Gleeson and Cairn saw their share prices in Q3 rise on the same quarter in 2015, by 45% and 3% respectively. 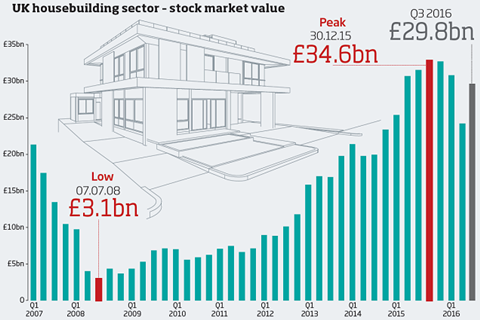 Since the beginning of this year, the sector’s total value has fallen 18% to £29.8bn.

Housebuilders were the best performers in Q3 compared with other sectors, but this was largely because they were recovering from the depths plumbed following the Brexit vote.

The construction sector was the next best performer, posting a 17% rise in values since Q2. REIT share prices, which also plummeted following the referendum, only rose by 4% during the quarter, indicating that investors remain wary of the impact of Brexit on commercial property.

Despite the damage inflicted by the referendum, the value of the housebuilding sector is still nearly 10 times greater than the low it hit in 2008 following the financial crisis.