The top listed housebuilders lost nearly £9bn in market value in six days of trading following the outcome of the EU referendum, capping off a miserable first half of the year for the sector. 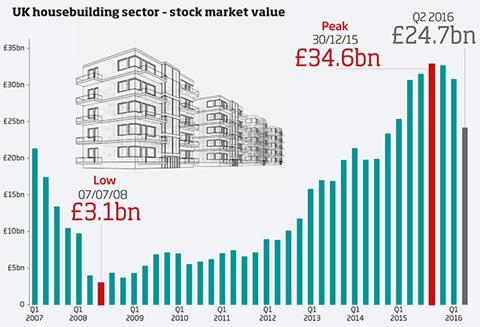 The speed and scale of the decline in value experienced on the Friday and Monday following the Brexit vote was “unprecedented”, according to consultant Building Value, citing the 18% wiped off the sector on 24 June and 16% slump on 27 June - equivalent to a fall of £12.5bn.

However, Tony Williams, Building Value chief executive, said the sell-off of housebuilder shares was a market overreaction and that the sector was in “excellent shape to weather the storm”.

“This was an either/or referendum and the markets backed either to the hilt - so they were in a terrible position when it went the other way. Domestic stocks were whacked and housebuilders and property took the biggest hit,” he said. 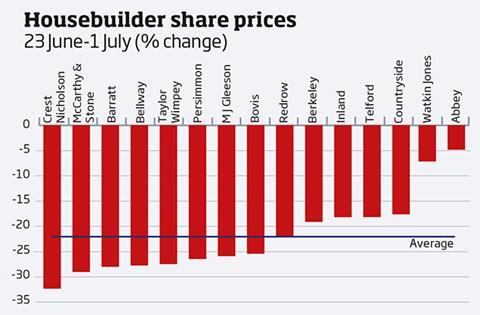 “But this is not Lehman Brothers - this is not a global financial crisis - and housebuilders are in much better shape than they were in 2008.

“Back then everyone was up to their neck in debt and had bought too much land - that is not the case at all now.”

The post-Brexit vote crash at the end of the second quarter followed a poor first quarter, when the share value of the sector fell 6% - the first fall in nearly two years - as a cocktail of global risks, including concerns about the Chinese economy, as well as uncertainty around the EU referendum, hit confidence. 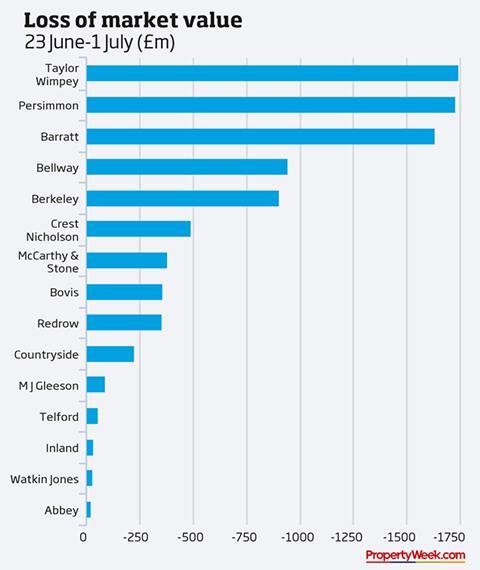 Housebuilders were by far the worst performers in the second quarter, followed by the real estate investment and services sector (REIS) and REITs, which were also battered following the Brexit vote as investors panicked over the potential impact of the ongoing uncertainty and a possible economic slowdown on the property market.

However, housebuilder share prices are still, on average, 11 times above the lows of 2008 - and are above the level of the third quarter of 2014.

“The market had come to a peak, so there was already a slowdown, particularly at the top end in London, but we aren’t building enough houses and demand is still there,” he said.

A drop in house prices would put pressure on margins, but any fall in profitability could be offset by a decrease in land values as the heat went out of the market, he added.

“So, in the short term the profits might be down, but if housebuilders can get land 5% cheaper then that will flow through to margins in a couple of years,” he said.

“It’s swings and roundabouts; but generally the sector is very well placed to withstand a few shocks - it’s learned the lessons of 2008.”

Now, of course, it will have to learn a few more.