Irvine on track with Northern Ireland and Miami housing

Ex-Formula One racing driver Eddie Irvine took a pit stop at Mipim in Cannes last week on the way from Italy (where he is in the throes of buying a house) to his private island in the Bahamas. 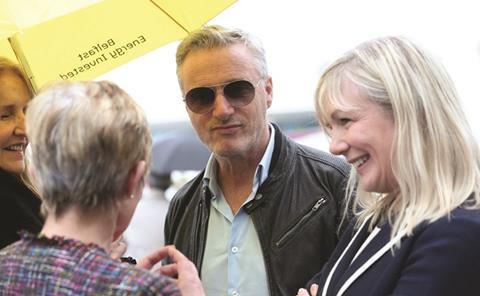 Sporting a leather jacket and sunglasses, the Northern Irishman, who was Michael Schumacher’s driving partner at Ferrari in the late 1990s, braved the torrential rain on Thursday to bang the drum for Belfast.

He also took time out of his busy schedule to talk to Property Week about his career in property, both in Northern Ireland, and Miami, Florida.

Irvine began investing in property long before his retirement from motorsport. He started buying houses in Ireland in the early 1990s and successfully rode the boom in the market over the years that followed.

It was only when he retired from racing a decade later that Irvine turned his attention to the more time-consuming business of property development. In Northern Ireland, he develops mid-market family housing, which he describes as “a good, solid steady business”.

“Northern Ireland is still cheap,” he says. “The recession has lasted a long time there. It’s starting to pick up now – we are finally increasing our prices.”

The type of houses Irvine develops in Miami are quite different from those he builds in Northern Ireland. In Miami, where Irvine also has a base, he is focused on the luxury end of the market, developing waterfront houses that sell for millions of dollars. Thanks to strong demand for high-end homes and rapid house pricing, it has proved a lucrative market for Irvine.

“What’s happened there has been incredible, but then Miami is incredible,” he says. “The houses I build in Miami, I build them as if I would live in them.”

In terms of architectural style, Irvine likes to develop homes that are “modern but as warm as possible”.

“A lot of people build modern houses and they turn out to be like a museum or art gallery, where there is nowhere to sit or put a drink,” he says. “I try to really make them liveable. I think every house I’ve sold in Miami still has the buyers living in it.”

Irvine says he has no great expansion plans and, if anything, he is slowing down. The busiest time in his property career came in the wake of the financial crisis when, having put the brakes on in 2005 and 2006, he was able to invest heavily buying up new sites.

“That Brexit thing has to get stopped. I can’t understand how anyone thinks it makes sense”

“That mess hit and it was such an amazing opportunity, I just had to get stuck in,” he says. “I bought a lot and I’m working my way through that now. In Miami, I have a little pipeline of sites I want to do and sell. I’ll run it down and do one or two houses a year.”

On this side of the Atlantic, Irvine is also taking things slowly and admits that he is concerned about Brexit, which he describes as “a massive issue”. “That Brexit thing has to get stopped. I can’t understand how anyone thinks it makes sense,” he says.

.@PropertyWeek @MontagueJones took time out with Eddie Irvine at the Belfast stand @MIPIMWorld to hear about his real estate investment career and his thoughts behind Belfast’s growth and success in recent years #MIPIM2018 #energyinvested pic.twitter.com/UAe33uSPjp

A slowdown in his property businesses gives Irvine more time to spend on his private island in the Bahamas, which was used to film Pirates of the Caribbean. He bought it as a virgin island and is building a luxury bolt hole there.

“The most exciting thing I have right now is my island,” he says. “I did buy it thinking I’d do something with it, but I just love being there on my own. I rarely even invite friends. I’ve been building – I go there with my digger and I get stuck in. It’s good to physically do stuff as opposed to work numbers and throw ideas out.”

After Mipim, Irvine is flying out on his private seaplane to spend a month on his island. He says he’ll probably sell it one day, but in the meantime, he has no intention of renting it out, the way Virgin billionaire Richard Branson does with his island in the British Virgin Islands. “I don’t understand why he rents it out,” Irvine says. “To have a private island and have loads of people around doesn’t make sense to me.”

With an island he has no need to generate income from, luxury homes dotted around the globe, a private seaplane and a boat in New York, Irvine clearly hasn’t done badly from his years in Formula One and property development.