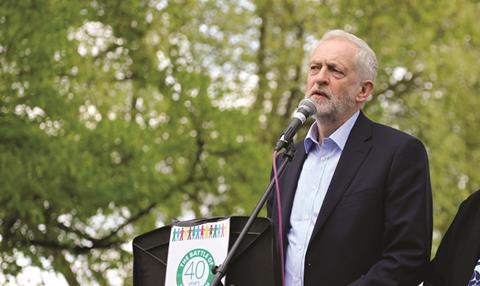 Not so long ago, it might have been thought safe to ignore the opposition party’s plans to overhaul housing policy, but with Labour and the Conservatives running neck and neck in the polls, the market is now sitting up and taking notice.

So what are the key policies Labour is advocating and what impact would they have on the market if the party were to gain power?

A shake-up of affordable housing policy lies at the heart of Labour’s new green paper, Housing for the Many. If elected, Labour has promised to invest £4bn a year to help fund the delivery of one million affordable homes over 10 years. It says it would also employ a stricter definition of affordable housing. To qualify, rents or mortgage costs would have to be no more than a third of local household incomes – homes rented out at up to 80% of market rates would no longer count as affordable.

In addition, it has vowed to adopt a zero-tolerance attitude towards developments without any affordable housing provision and crack down on what it calls the ‘viability loophole’, by making it impossible for developers to renege on their commitments when they threaten the viability of schemes. A new body would also be set up called English Sovereign Land Trust to bring forward cheap land for development.

Labour’s policy that there should be ‘no development without affordable housing’ is causing concern. It would mean an end to exemptions given to small and rural sites as well as residential conversions carried out under permitted development rights.

Justin Gaze, head of residential development land at Knight Frank, warns that Labour should be careful not to discourage development by making rules around affordable housing too rigid.

“We all agree there is a social need for decent quality affordable housing, but trying to implement a blanket policy like this is wrong,” says Gaze. “There will be instances where affordable housing cannot be provided, for example on conversions of some buildings where it’s difficult to deliver both open-market and affordable housing side by side.”

He adds that Labour’s approach to social housing is “commendable” but that the policies put forward in the green paper would deter developers from undertaking new projects and result in fewer homes being built.

Others in the industry are more upbeat about the proposals, particularly the plan to invest £4bn a year.

“The £4bn annual investment really stood out for us,” says Emily Williams, associate director at Savills. “The emphasis on investing to deliver more homes to solve the housing crisis, rather than relying on housing benefit to support people who can’t access market housing, is something we have been talking about for a long time.”

The £4bn annual housing grant, however, may not be enough for Labour to hit its target of building 100,000 affordable homes a year, according to Savills, which puts the figure needed nearer to £7bn a year.

Brian Robson, acting head of policy and research for the Joseph Rowntree Foundation (JRF), is also positive about the green paper, calling the proposals “sensible”.

The foundation has been tracking the delivery of affordable housing for some time and is concerned about the impact viability challenges are having. Robson says many of the measures Labour has proposed build on the good practice he has seen in the local authorities that use section 106 agreements most effectively.

He adds that the English Sovereign Land Trust (a body that would be set up to work with councils to buy land at a price close to existing use) is an “interesting concept” and praises Labour’s pledge to change rules governing the compensation paid to landowners. “It builds on a growing cross-party consensus that the land market is central to our housing challenges,” he says.

If the polls are to be trusted, Labour has a real chance of winning the next general election, whenever that may be, and Housing for the Many could therefore form the basis of the next government’s housing policy. The industry may not like all the proposals in the green paper, but it should be ready in case they are put into action.