One of the biggest questions facing build-to-rent (BTR) developers and investors is: what sort of facilities and perks do tenants really want? 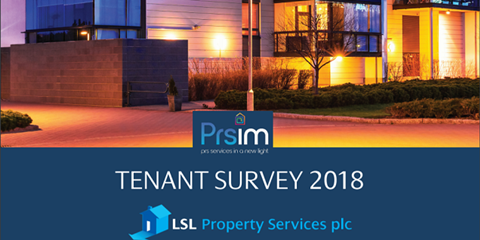 Read the full results of the PRSim tenant survey 2018

The lack of completed developments makes it difficult to understand what works and what doesn’t, but now,a new survey from consultancy PRSim has shed light on the issue by quizzing more than 3,700 tenants across the UK living in BTR schemes and other private rented developments.

The survey reveals that the number one perk tenants are happy to pay for is pets. Next on their list of preferred facilities comes high-speed internet, then allocated parking spaces and gardens. These have broad appeal across all the different age groups, whereas other services, such as house cleaning, tend to be more attractive to younger groups with more disposable income, according to PRSim.

As well as working out what facilities or services to provide, landlords have to decide which to include in the rent and which to offer as add-ons. 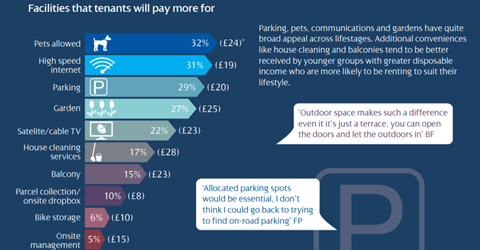 David Bond, head of PRS and BTR at PRSim, says they have to be careful not to price themselves out of the market by bundling too much into the rent and therefore falling outside the scope of people’s online searches. “If you get people through the door, you have a great chance of selling to them,” he adds.

The survey also shows that tenants are particularly interested in services or facilities that help them save money. For example, about half of respondents would be interested in taking out contents insurance through their landlord, particularly if they can secure a discount by doing so. The ‘smart living’ facilities with the greatest appeal were also those focused on reducing costs, such as energy-saving appliances.

“The cost of living is a consistent and important focus for tenants,” says Bond. “Emphasise the green credentials of your building and how this can help with utility bills.”

@_PRSim in Manchester for the northern launch of our tenant survey at the fantastic @LOFTINTERIORS showroom. 'Know your resident' is a @_PRSim specialism and absolutely critical when defining the resident offer and the scheme design. pic.twitter.com/z1Aynz4HZh

Security deposits are another major financial concern for renters. The government is looking to cap deposits at six weeks’ rent, but some BTR landlords have already gone further. Last year, Get Living scrapped deposits and its chief executive, Neil Young, said he hoped deposit-free schemes would become “the norm”.

The survey reveals widespread interest in alternatives to standard deposits. Seven in 10 respondents say that not having a security deposit would be influential in their decision to rent a specific property. In addition, just over half are interested in an alternative or insurance-backed scheme that would allow them to pay a monthly insurance fee instead of an upfront deposit.

Other key findings of the report relate to the demographic make-up of renters and their different priorities. The survey found that people aged between 18 and 24 comprise just 22% of renters, which PRSim says challenges the idea that BTR is defined by Generation Rent.

“This is not just about young people who see renting as a lifestyle choice, as a nearly equal split of tenants across the key lifestage groups confirms that a BTR development needs to meet the lifestyle, location and economic needs of a real cross-section of our society,” says Alastair Carmichael, PRS lead at GVA, a strategic partner of PRSim.

He adds that investors are showing growing interest in schemes aimed at the over-50s who are likely to rent for longer, providing long-term stable income for investors. The survey results suggest that older people may well embrace such schemes, as 43% say they would consider developments targeting the over-50s.

The first such schemes are now being developed. Only when they are completed will it become clear whether older tenants really want to live in schemes specifically designed for them.