A Brexit could spark a sharp fall in house prices over the next two years, according to a survey undertaken by Property Week. 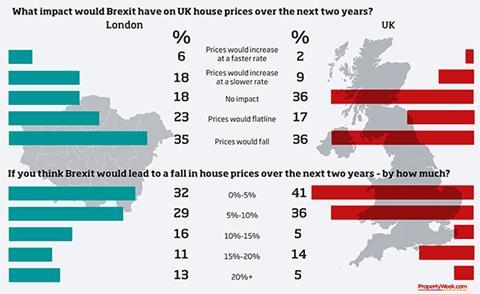 The snap poll of 65 readers found that 53% expect house prices in the UK to either remain flat or decline over the next two years if the UK opts to leave the EU in next week’s referendum – and the figure for London is higher still at 58%.

Of those who think that Brexit will lead to a fall in prices, an overwhelming majority (77%) think prices in the UK could drop by between zero and 10% over the next two years.

The findings support those of the Treasury, which earlier this month warned of an immediate economic “shock” if the UK opted to leave the EU.

It said that house prices would drop by at least 10% and up to 18% over the next two years compared with what was expected if Britain chose to remain in the EU. 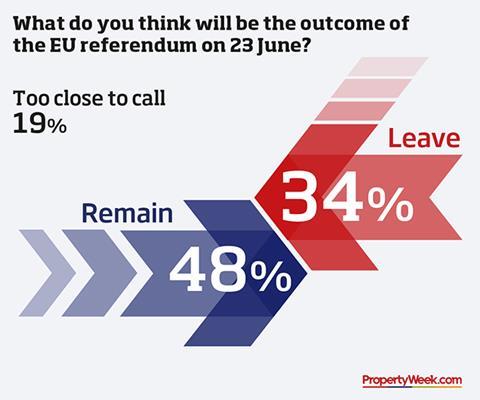 This claim has been dismissed as scaremongering by the Leave campaign, while others argue that a fall in prices may be no bad thing as it would help those who are priced out of the housing market to get on the property ladder.

Over a third of respondents (36%) said that Brexit would have no impact on house prices in the UK – but this figure fell to 18% when considering the London market.

However, others had a far more bleak prognosis should the Leave camp win. “Brexit will be devastating for much of the UK residential market,” said one respondent.

“It won’t kill it altogether but it will dramatically slow the progress made since 2008, and foreign capital will be reduced to near zero for a number of years. [It’s] not worth the risk.”

How do you think Brexit would affect the resi market? Share your thoughts in the comment section below this story

London’s prime residential market was singled out by nearly half of respondents (44%) as most vulnerable to the impact of Brexit, reflecting the view, shared by 62% of respondents, that the uncertainty generated by a vote to leave the EU would see a fall in inward investment.

“Brexit will mostly impact prime central London, which is dependent on foreign investment,” said one respondent.

Affordable housing supply – which falls if overall levels of development drop, and is contingent on government funding – was considered the next most vulnerable segment of the housing market. 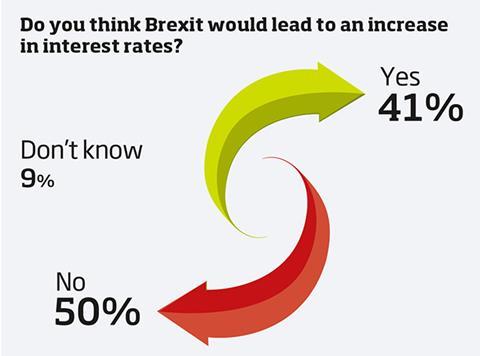 However, while others agreed there would be an impact they felt it would only be short term.

“There is an acute shortage of good homes in the top cities in the UK,” one respondent said. “There might be a temporary blip in demand, but Brexit wouldn’t stop the residential growth when the underlying fundamentals are so strong.

“Super-prime residential in London will be affected, but the middle-income private rented sector (PRS) will not be too affected. For long-term investors, I think PRS will be very interesting.” 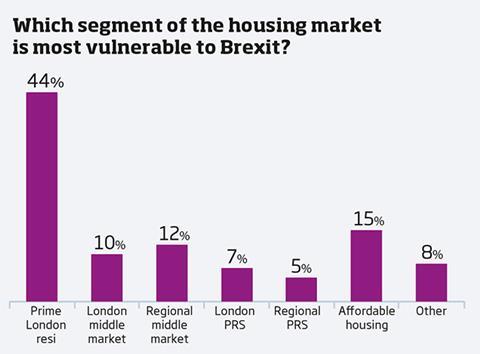 Others were even more sanguine, arguing that a fall in the pound could actually help boost foreign investment into the residential market due to the improved exchange rates.

“Property prices and exports would be supported by a weaker pound as they were in 2011 to 2012, when we saw unprecedented European demand for property in England because of a weak pound against the euro,” said one respondent.

“We would also be seen as a safe haven in a eurozone on the point of breaking up. Demand for property would be stronger than it is now, from both France and Italy especially.”

The survey revealed a split on the question of whether Brexit could lead to a rise in interest rates – 50% said rates would not increase, compared with 41% who thought they would.

With a series of polls in recent weeks putting the Leave campaign ahead – and bookies’ odds on Brexit narrowing – 34% of respondents thought Leave would win next week’s referendum, while 19% said the vote was too close to call.

However, nearly half (48%) said they expected Remain to carry the day, suggesting scepticism about the accuracy of the opinion polls. 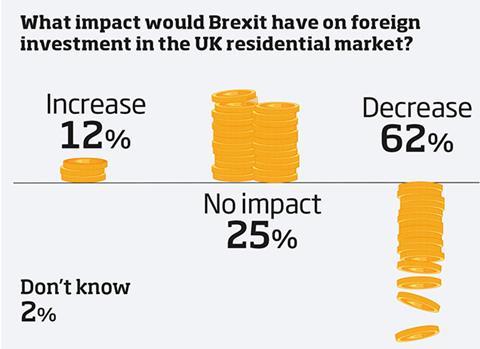