A third of local authorities in England are forecast to miss two or more government housing targets, according to Savills’ planning performance index. 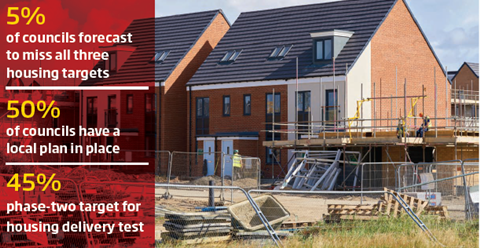 Savills research into projected housing delivery by 2019 predicts 110 of England’s 326 councils will fail on two or more of these counts. Eight of the 14 authorities predicted to miss all three targets are London boroughs.

So why are so many local authorities struggling? The research shows that where councils fail to hit two targets, it is usually because they have not adopted a local plan or identified a five-year land supply, as one relies upon the other.

To convince the government that they are doing everything possible to build enough homes, councils need to adopt a local plan, identify a five-year land supply for housebuilding and pass the newly created housing delivery test.

David Jackson, head of planning at Savills, says planning departments being under-resourced is one of the biggest reasons some councils struggle to hit the mark. A lack of local planners is often to blame for delays in the publication of local plans, he adds.

“There is a shortage of planners – the whole profession can feel it,” he says. “Go back 10 years and we were in the midst and misery of the downturn. There weren’t many people thinking: ‘I know what I’ll do – I’ll go into local plan-making.’ Fast-forward and resourcing for local authorities is now a real issue. Overcoming it can only be achieved by bringing people into the profession and through into local plan-making teams.”

Yes and no - this slide tells you a lot BUT planning consents are still up 40% in three years pic.twitter.com/rQmvZgrxoi

Another key reason local councils fail to hit their targets is that the way need is assessed for the housing delivery test changed earlier this year. As a result, some local authorities’ housing targets have rocketed, making it significantly harder for them to pass the delivery test.

“Some local authorities have had a very significant uplift,” says Jackson. “The housing targets for Havering and Barking & Dagenham, two key growth areas in east London, have increased by more than 60% in the new London Plan.”

He says that because the housing delivery test is being phased in – councils have to meet 45% of their target by 2019 – it is only hurting those who are already performing poorly.

However, the extent of the problem was highlighted during a panel debate at LREF last week, where representatives of Sutton and Kingston councils revealed that their housing targets had trebled and doubled respectively.

The government is using a combination of rewards and penalties to get councils to play ball: bonuses for those hitting targets and the threat of losing planning powers for those that don’t. But is it enough?

Jackson reports improvements in the rate of plan-making, but says there is still a way to go.“We’ve reached the magic number of 50% coverage – over half of England’s local authorities have a local plan in place. What we need is the rest of the country to catch up,” he says.

“Maybe we will see that in the next few years with the simplification of the national planning policy framework, but local authorities really need to concentrate their efforts and get a local plan in place and keep it up to date with five-year reviews.”

There is a question mark over whether the government will follow through on its threat to remove planning powers, but there’s only one safe way for local councils to avoid being penalised – they need to hit all their targets, which is easier said than done.