Residents at Capital & Counties’ (CapCo) controversial Earls Court development site are claiming victory over the developer today as the local council moved to retake control of the two housing estates at the heart of the scheme, Property Week can reveal. 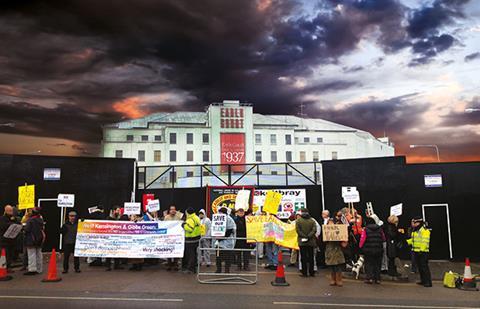 Steve Cowan, the leader of the London Borough of Hammersmith & Fulham, has revealed the council is planning to wrestle back control of the West Kensington and Gibbs Green housing estates, which have 760 homes and 2,000 residents, once a new masterplan from CapCo has been approved.

The masterplan is expected to result in a revision of CapCo’s plans for the site, which had originally envisaged a 10.1m sq ft Terry Farrell-designed development including 7,500 homes, offices, hotels, work space, education, cultural and community facilities, as well as a new five-acre park.

Cowan also slammed the developer’s existing plans for the site in a letter to local residents this morning.

Cowan wrote: “On 10 August 2012, the approved Earls Court Scheme was valued at £12.05bn. That scheme included all the homes on the West Kensington and Gibbs Green estates.

“A few months later, at a cabinet meeting on 3 September 2012, it was agreed that CapCo could buy the 21 acres that made up those estates for just £110m, with a weak and insufficient provision for replacement affordable homes.

“This was a poor deal for residents. In fact, the terms of that contract failed to guarantee to provide replacement, like-for-like homes, for all current estates’ residents, which meant many residents would not be re-housed.”

Cowan, the Labour leader who took the helm of the council in June 2014 after the previous Conservative administration had approved CapCo’s £8bn plans for the 77-acre site and the demolitions of the two housing estates, then went on to provide the news local residents had been waiting to hear for nine years.

“CapCo’s latest proposal is to develop a new masterplan for the Earls Court scheme. If that gets planning permission, we would see the two estates return to council control.”

A source close to CapCo said the group was “in ongoing conversations to explore options for an enhanced masterplan for Earls Court” and that “existing contracts and arrangements remain in place”.

The source said the scheme would not be smaller, and the masterplan “across the entire EC Opportunity Area would seek to deliver an increased number of homes across all tenures”, adding the group was seeking to build an additional 2,500 homes on the site, bringing the total to 10,000.

Reacting to the news Jonathan Rosenberg, community organiser for the West Kensington & Gibbs Green Estates, said: “For nine long years, residents have been fighting to save their homes and preserve their community. Our campaign has been through some very dark times. But, right now there is a tremendous wave of excitement sweeping across the estates.

“The council leader is working very hard to get the estates out of the land sale contract. We believe that our campaign is on course for victory and we look forward to finally lifting the curse that has so sorely afflicted our community.”

CapCo has fought a long running battle with local residents over its plans for Earls Court. Since gaining planning approval in 2012 the property company has also suffered from a weakening in London’s luxury housing market.

In February CapCo revealed the scheme had shed a fifth of its value in a year thanks to “adverse conditions in the London residential market”. The scheme was valued at £1.1bn at the end of 2016, down 20% from its £1.4bn valuation a year earlier.

The land value decline pushed the group, which also owns large areas of Covent Garden, to a £119m loss in 2016, down from profits of £431m a year earlier.