This year’s Midsummer Retail Report paints a more upbeat picture of a sector heading into a seven-year recovery. Kat Spybey reports and examines the key findings in detail.

High streets across the UK have been imploding over the last five years, battered from all sides by retail administrations, a collapse in consumer spending, and the rise of internet retail.

But despite talk of more retail casualties on the horizon, this year’s Colliers International Midsummer Retail Report is more confident, calling the start of a recovery for the beleaguered sector. 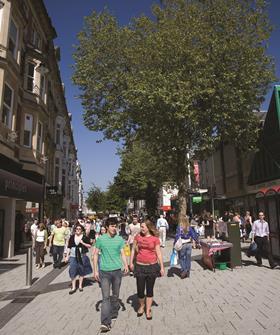 The 26th edition of the annual report predicts that, from next year, many UK high streets will gradually recover, so that by 2020, vacancy rates will have dropped back to pre-recession levels and rents could start to grow.

The report shows that the vacancy rate across Great Britain stands at 11.8% of total floorspace, representing 55m sq ft of shops. This is already down from the peak of 13.2% of October 2012. However, Colliers predicts that over the next seven years, it will continue on this downward trajectory until it reaches the pre-crisis norm of around 7%, which was last recorded in October 2006.

Russell Francis, head of valuation and advisory services at Colliers, explains this recovery will be driven largely by population growth — an extra 3.3 million people predicted for Britain between now and 2020 — gradual economic growth and the lack of significant retail development.

“Supply is almost frozen, but the population is growing very rapidly and the market assumption is that we are going to return to some kind of economic growth and the gradual recovery of consumer expenditure, and that will feed through to the high street,” he says. “By 2020, the market will be pretty healthy again.”

But the research will not make positive reading for every town across the country. Although this recovery will end fears of a death more generally on Britain’s high streets, Colliers warns it will remain “almost fatally wounded in some locations, where intensive care is required”.

Francis says: “The benefit will be disproportionate to big, dominant centres and convenience locations, so it’s the middle-sized, non-dominant centres that will get squeezed further.”

This imbalance can be attributed to the rise of online shopping, which currently represents about 13% of non-food expenditure but is likely to rise to around 20% by 2020, when it will start to level off.

This is forcing retailers to focus on fewer, bigger stores in which they can create experiential showrooms, while the popularity of online food shopping has provoked “a push back to convenience stores as people seek to top up locally”.

In accordance, retailers’ strategies are shifting from extensive roll-out programmes of up to 300 stores, to a focus on portfolios of 20 to 50 stores in core centres, supported by a transactional website.

For those marginalised towns, Francis warns they “will never go back to their previous form” and to date there has been “not enough demolition”.

“The key is for local authorities to stop trying to hold on to the past, saying a certain percentage of space needs to be retained as A1 use. They need to be more flexible and respond to more locally led enterprises, and bring people back into town centres, whether that’s through residential, student housing or local authority offices.

But he adds the structural shift provided opportunities for more agile independent retailers, with lower cost bases, to re-establish themselves, ending the run of “clone town” centres dominated by the same brands. 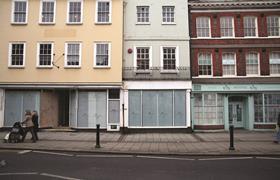 Put into context, the 55m sq ft glut of empty space across Great Britain, which totals 12% of all non-food floorspace, is equivalent to almost 33 Bluewater shopping centres.

But as vacancies remain heavily polarised, it is precisely this type of shopping centre and location that is fairing best.

Prime locations in main regional cities have just 6% of their shops empty, and for primary out-of-town regional schemes such as Bluewater, Meadowhall and Intu Trafford Centre, this falls as low as 2%-5%. But when looking at secondary and tertiary space within these same cities, the number of voids rises to 17%.

In medium-sized towns, such as Bridgwater, the number of empty units is above the national average at 14%, while small towns such as Devizes fare better, with just 9% empty.

Lease expiries in the next five years could also spell a rise in the vacancy rate for many of these squeezed areas, as large multiple retailers such as Arcadia downsize their portfolios, exiting towns now deemed marginal for their brands.

As landlords have sought to minimise voids and incentivise retailers, rents have continued to fall for the fifth consecutive year. In the last 12 months rents dropped by 0.9%, the same as recorded in 2012.

This persistent rental decline means that across Britain, real-term rents are now 22% below 1987 levels and 26% lower than those achieved in 2008 as the crisis took hold.

Reaffirming London’s retailing bubble status, it was the only region over the last year where rents increased, with a 3.5% rise recorded in central areas and a 3.3% increase in the outer boroughs. It was also the only region where rents have risen since 2008, up by 22%.

Outer London, however, experienced a decline in the same period of 9%, while the south-east fell by 17%.But when the capital is taken out of the equation, rents across Great Britain fell by 3.6% in the last 12 months. Four of the five top-performing centres were in London (table 1).

Skegness was the highest riser outside London — a quirk explained by its geographic isolation helping to retain shoppers.

The north-west suffered the biggest fall in rents, down by 5.5%, while Newport was the worst-performing town (table 2), largely because of a high number of proposed new retail developments, closely followed by Nuneaton and Stockport, both victims of retail failures and having to compete with the neighbouring powerhouses of Birmingham and Manchester.

Who is taking new space?

Despite constant talk of retailers consolidating, there remains a strong contingent keen to secure new space.

Leading the charge, particularly in the smaller centres and convenience end of the market, are the discounters. 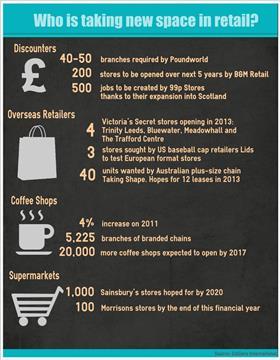 Among the pack, 99p Stores is surging ahead with a particular focus on Scotland and a stated aim to open 100 sites between last summer and next July. B&M Retail is also targeting 40 shops a year, while Poundworld is keen to secure 40 to 50 more units.

But Mark Charlton, head of Colliers research and forecasting, warns that consolidation within this market in the near future is expected, as brands near saturation point.

Overseas retailers are also refocusing their attentions on the UK, as their domestic markets start to improve — for example, US brands J Crew and American Eagle — but these roll-outs tend to be focused on London.

American brands in particular are keen for UK stores to act as springboards into a wider European expansion.

There is an appetite for the regions from some overseas names, however, among them American baseball cap retailer Lids and Australian plus-sized retailer Taking Shape, alongside more established brands such as Hollister and Victoria’s Secret.

Supermarket chains are also switching their attention to expanding convenience concepts to tap into increasing demand for smaller, local shops to supplement larger online deliveries. Morrisons is seeking 100 sites for its M Local format this financial year, and has already acquired a large chunk of post-administration units from Blockbuster, Jessops and HMV.Sainsbury’s is also searching for 125 stores a year for the next three years, while Co-op, Waitrose and Iceland also have expansion plans.

Leisure has become a crucial element of retail centres, helping landlords to diversify and increase dwell times. Having been a feature of multi-let shopping centres for a few years, leisure operators are now moving into single retailer space, as demonstrated by Tesco’s acquisition of Giraffe in March. Restaurants are expected to start appearing in the supermarket giant’s larger superstores soon.

Mark Charlton, head of Colliers research and forecasting, predicts other supermarkets will adopt similar strategies as they seek to rationalise large, out-of-town store portfolios and reduce space set aside for electricals.

But he questions how the experiment will work, as Giraffe, although family orientated, is not a fast-food format and it is not clear whether shoppers will sit down for meal in a superstore.Coffee chains are also embarking on rapid expansion plans as consumer habits change.

Cafes are increasingly regarded as social meeting points and mobile offices offering free wi-fi. Colliers reports that Costa has 349 immediate requirements, Starbucks (pictured) aims to open 1,200 sites in the next five years, 200 of which will be drive-throughs, while Caffè Nero has 224 immediate requirements.

Colliers lists 16,723 coffee shops in Great Britain, up 4% in the last two years, and 5,225 of these are occupied by the branded chains. Largely unaffected by the rise of internet retailing, the number of shops is expected to rise to more than 20,000 by 2017.

Following the mothballing and revision of many proposed retail schemes during the recession, a new wave of development is expected to start in four to five years’ time. This will largely be concentrated in and around regional cities — for example, Hammerson’s Victoria Gate in Leeds.

Map of the retail development pipeline

With London poised to experience a 20% growth spurt in its population between now and 2020, the capital and its surrounding suburbs will also be a key focus for development to capitalise on the increased footfall and consumer spending. Schemes such as Westfield and Hammerson’s Whitgift Quarter in Croydon and Lend Lease’s Elephant and Castle shopping centre are already on the cards.

Much of the redevelopment, however, will be focused on the relocation and regeneration of existing space, rather than the creation of additional property.

Who is to blame for the high street’s pain?

Colliers insists “rents are not the issue”, as landlords have been very protective and keen to keep stores occupied, which has been borne out through the continued drop in rents.

Instead, the report points the finger at a reduction in consumer expenditure, excessive competition and over-development, but warns “central and local government must carry much of the blame for not trying to address the issue since 2008, when the decline started”.

To combat the decline, Colliers calls for measures such as: a rating revaluation to be introduced now; rates relief in town centres where the vacancy rate is above the 12% average; the return of council and county council offices and facilities to town centres to boost footfall; the use of compulsory purchase powers to encourage large-scale redevelopments of surplus space; and the setting up of five-year business plans to reinvigorate town centres.

Another suggestion is the creation of “Regus-style” shops, with standard fit-outs, enabling brands to launch quickly and cheaply, and trade for as long as necessary before finding permanent stores.