Scenic Railway is a Dream for Margate 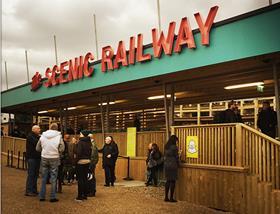 He spent a further £500,000 – equivalent to £15m in today’s money – developing a thrills and spills theme park called Dreamland replete with pleasure gardens, rides and amusements.

But Iles saved his pièce de résistance for the heart of the site where he constructed the Scenic Railway – a mile long wooden rollercoaster that offered panoramic views of the seafront. Despite being badly damaged by two fires – one in 1948 and one in 2008 – last week the Grade II* listed ride reopened to the general public having been restored to its former glory as part of the renovation and reinvention of Dreamland as the world’s first heritage theme park.

Like Margate itself, Dreamland and the Scenic Railway – which is one of just eight around the globe – have risen phoenix-like from the ashes as part of an ambitious regeneration of the North Kent seaside town, which had fallen into a sorry state of disarray by the mid-2000s.

The restoration of the Scenic Railway completes the first phase of the £28m redevelopment of Dreamland and the end of an 11-year ‘Save Dreamland’ campaign headed up by locals and theme park enthusiasts. 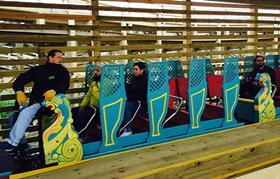 Speaking at the rollercoaster’s opening Eddie Kemsley, CEO of Dreamland, says the day marked a significant milestone in the park’s redevelopment.

“This isn’t just about a ride opening – this is a real feat of engineering,” says Kemsley. “This structure is nearly 100 years old. It may have new bits of wood, but this is a 20th century design in a 2st century environment. It’s a phenomenal achievement.”

Kemsley admits that the project was fraught with difficulties, with the rollercoaster opening later than scheduled – the theme park opened its doors for the first time in June, with the Scenic Railway due to open by the end of the summer. The listed status of the railway only served to complicate the construction process.

“At all times over two thirds of the structure had to remain standing, which is effectively how it retained its listed status, so we could only take down bits at a time,” explains Kemsley. “There were a lot of challenges around retaining the design of the railway and at the same time making sure that we measured up to modern day health and safety standards.” 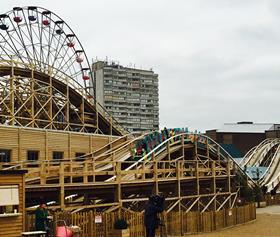 As the new Dreamland management team didn’t have the original plans for the railway to work from, they had to rely heavily on aerial images and photographs of the ride in its heyday. In essence the rollercoaster is an identical copy of the original ride and Kemsley is confident that it will have as big an impact on the town as its predecessor, which drew in more than a million passengers in its first full season in 1921.

“Dreamland was a project that was built around the idea of regeneration and putting the heartbeat back into Margate and this summer we’ve achieved that,” says Kemsley. “Hotel bookings are up 55%, the Turner Contemporary Art Gallery is reporting visitor numbers are up 25% and we’ve just started doing some analysis of our numbers that show more than a third of our visitors are coming to Dreamland from London, which is huge for a regional attraction. That pebble in the pond ripple effect is what this project was all about.”