As sexual harassment in the entertainment industry continues to dominate news headlines, Property Week asks how serious the problem is in property. 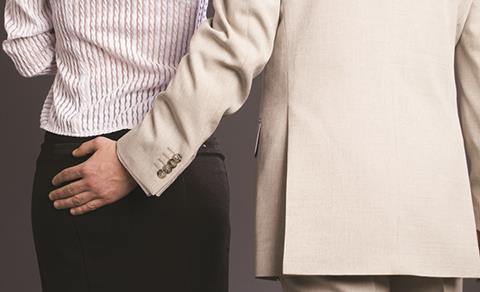 Paul* was a sexual predator. Everyone in the office knew it. His bosses knew it and sadly far too many female members of staff knew it, having been subjected to his unwanted advances.

One day a colleague - let’s call him Chris* - decided he couldn’t take it any more. He reported Paul’s antics to senior management, fully expecting them to act. That was not what happened.

“They did nothing about it because the board director who headed the department in which the offender worked closed ranks behind his talented star and protected him with a ‘you are a very naughty boy’ telling-off,” says Chris.

Paul was probably just a one-off, right? Sadly not. In the wake of our leader column two weeks ago ‘How many Weinsteins are there in this industry?’ (20.10.17), Property Week has been contacted by a number of people - male and female - wanting to share their own horror stories of workplace sexual harassment.

One told the sordid tale of the chief executive who sexually harassed a secretary at the work Christmas party - and later paid her off with hush money. There was also the incident involving a leading agency figure who sexually abused members (plural) of a catering team. And then there were the two senior directors whose abuse not only went unpunished - one of them was promoted.

The sexual harassment spotlight remains focused on the entertainment world, but its glare is spreading inexorably to other industries, including property. So just how serious a problem does this industry have?

In a ComRes survey undertaken for the BBC and published last week, half of British women and a fifth of men claimed they had been sexually harassed in the workplace or place of study.

Opinium Research figures are equally damning. They suggest that only 43% of female victims of harassment reported it to somebody in their business and that on one-third of these occasions, although their complaint was acknowledged, no action was taken. Looking specifically at the real estate industry, the research found that 20% of people had experienced sexual harassment at least once. 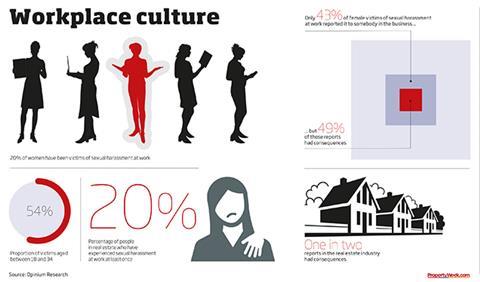 On the face of it, you would expect the number of reported incidents to be higher. The tales told after seemingly every Mipim in Cannes paint a picture of an unreconstructed pale, male industry that tolerates, even flaunts, the most shameless attitudes and behaviour towards women. Disturbingly, there are even stories of men propositioning female property peers, assuming they belong to a rather older profession.

Unfortunately, the bad behaviour is not confined to Mipim. Yet many of those approached to comment for this article politely declined. Others only spoke on condition of anonymity.

The stark reality is that the problem is so endemic that people simply don’t feel they can speak out on the record. Take Beth*, a senior agency figure, who recalls the sexual harassment she experienced when she started out in property.

“It’s something I certainly noticed more as a graduate entering the industry as I had no power or status and was disconcerted to receive advances from men in very senior positions within the company I gained a graduate placement at, not to mention lewd and inappropriate remarks and comments,” she says.

“It was something you were expected to laugh off and accept, as speaking up and creating a fuss would have caused an unwanted stigma, which at the time, when I was keen to advance my career, would have no doubt had the opposite effect.”

As Beth’s career has progressed and she has joined the management ranks, the frequency of these incidents has thankfully dwindled, but they haven’t disappeared entirely.

“Even as a senior member of staff, I have been singled out by a male boss as a clear favourite - and not due to professional performance,” she says. “I have had to laugh along and put up with very inappropriate remarks about my appearance and even give him kisses - on the cheek, but still - which has left me feeling very angry and powerless.”

And ultimately that’s what this is all about - power. “Older men who are sitting at the top of a hierarchy use their positions of power to advance on younger girls in the industry who they know are keen to get ahead and probably wonder if they have any choice if they want to advance their careers,” says Beth.

Giulia Bunting, planning director at GL Hearn and Revo president, agrees. “Power is the issue here, as in many other walks of life,” she says. “People in power feel they can take advantage of others. In a male-dominated industry, there are few checks and balances.”

Jenny* knows this only too well. She started out as a graduate and worked her way up to director level at a large international agency business and she claims that she has been the victim of both verbal and physical sexual harassment from property industry colleagues, who were usually older, more senior members of staff.

She says she never told her bosses or the HR department because she sees it as an issue that extends beyond the industry. “It’s society’s problem. You’re more likely to have someone press themselves against you on the tube or walk down the street and have someone smack you on the bum or go into a bar and have someone come on to you than you are to experience this kind of behaviour in the workplace,” she says.

She adds that she has even detected a slight fall in the level of sexual harassment in the workplace. “Ten to 15 years ago I used to get lewd comments all the time, but it doesn’t happen as much nowadays,” she says. “Historically, property has been a male-dominated industry. It’s no different to if you had an old boys’ grammar school and then suddenly girls were introduced. We were always going to have a steep learning curve in terms of behaviour.

“I think previously a lot of men thought that women in the industry were just floozies and there was no place for them, but we’ve proved them wrong and are now appreciated for numerous different reasons, but mainly because we are bloody good at what we do.”

The growing number of women in the industry helps. “Throughout my career, I didn’t have a female role model, but now I have a personal interest in making sure the path people in my peer group have paved makes it easier for others coming through,” she says. 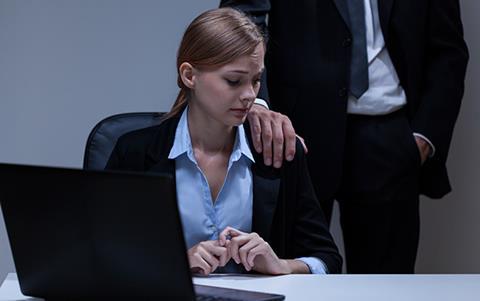 What should further aid progress is the new generation of men entering the industry, adds Beth. “I have witnessed men such as this defend women in situations when other, older men are being inappropriate towards women and demeaning them. This gives me a lot of faith that the industry is changing.”

We are still in the dark ages, particularly in the agency world - Peter*

Unfortunately, Peter*, who has worked in property for more than 20 years, does not share her confidence. “I know a young woman who has just entered the industry and I am genuinely shocked by what she had to say. The attitudes are still unbelievable,” he says.

“I keep asking myself why graduate recruitment schemes are generally 50/50 male-female, yet when you look at the leadership, the number of women at a senior level is pitiful. The number of women is disproportionately small, frankly, relative to any other profession.

“This is about behaviour as much as diversity. We are still in the dark ages, particularly in the agency world, which I think is most at fault.”

Clearly more needs to be done, but Brenda Jones, national chairman of the Association of Women in Property, is hopeful that the situation is slowly improving and that greater awareness of the issues, thanks to the media coverage generated by scandals surrounding high-profile public figures, will only accelerate the rate of change.

A very long way to go

“If there is one positive thing to have come out of the revelations about Harvey Weinstein’s sordid behaviour, it is that sexual harassment is now firmly in the public domain,” says Jones.

“No perpetrator can pretend they weren’t aware how totally unacceptable this abuse of power is. We have no statistics about it because, as has been revealed, much of the time it isn’t spoken about. However, what we can see in our industry is improving gender parity and a growing respect for diversity.”

Anyone guilty of sexually harassing women will find they are the subject of disciplinary procedures - Brenda Jones, Association of Women in Property

She adds that most employers genuinely want to create more diverse workforces and a working environment in which people feel respected and valued. “This is becoming the norm and with it comes greater confidence to speak out on previously ‘unspoken’ or taboo issues,” she says. “Anyone who is guilty of sexually harassing women - or men - will find they are the subject of disciplinary procedures.”

Bunting concedes we are only at the beginning of the journey. “We have seen some high-profile activity from key names in the industry. However, there is a very long way to go,” she says. “It is not enough to simply tick boxes with vague diversity and inclusivity policies. We need to see a real step-change in attitude and practices.”

This will need to be driven from the top down. Yet anecdotal evidence suggests that senior management figures have been complicit and helped to cover up incidents - or in some instances have even been the perpetrators.

Sadly none of the women who agreed to speak to Property Week about this issue had ever reported the incidents for fear of being ignored or punished. They were right to be concerned if Chris’s experience is anything to go by.

He knew that speaking out might damage his career and so it proved. A member of senior management turned on him a few months after he reported his colleague and made his life a “stressful hell”. Even so, Chris says that he wouldn’t hesitate to do it again.

And Paul? “He remains in post at the same level, unpunished and still married,” he says. “God help us all.”

Indeed. But now that the Weinstein scandal is forcing the industry to take a long hard look in the mirror, perhaps it is time it started to try and help itself rather than waiting for divine intervention. After all, there is nothing divine about the behaviour that continues to blight it.

*The names of some individuals in this piece have been changed