Shed of the future: automatic for the people

A driverless vehicle docks at a remote warehouse in the Scottish Borders. Inside the four-storey facility, a workforce of more than 1,000 robots simultaneously picks items of stock and packs them into boxes ready for delivery to customers’ houses via an army of unmanned drones. 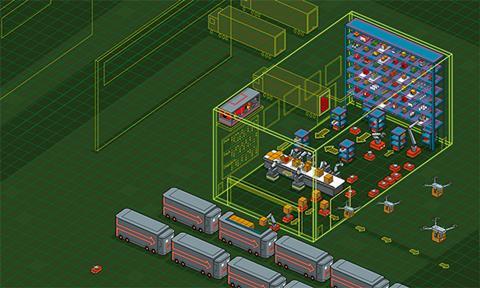 Technologies that were once dismissed as fanciful are now on the brink of commercialisation with significant implications for how logistics facilities are designed and developed.

Like most developers, db symmetry is investing considerable time in understanding the different emerging technologies so it can future-proof its facilities.

“Only a few years ago, even the thought of driverless trucks, drone deliveries and robotic automation would have been seen as sky-high thinking,” says db symmetry director Andrew Dickman. “But these futuristic ideas could now potentially become an integral part of logistics.”

There remains huge variation between occupiers when it comes to the adoption of new technologies. However, at a base level, developers are having to ensure that new shed design and the infrastructure that goes with it can support the need for greater connectivity and provide occupiers with the flexibility to install the automation that meets their operational requirements.

Buildings are going to have to get taller because it means occupiers can do more automated things inside them - Kevin Mofid, Savills

The increasing automation of warehouse operations means the availability of sufficient power, in particular, is critical to business continuity. Verbeek says IDI Gazeley’s new 575,000 sq ft Altitude development in Magna Park, Milton Keynes, will have more than three times the power capacity that a similar-sized shed would have had 10 years ago, enabling it to support features such as electrical car charging points, which now come as standard on new-builds.

At a haunch height of 21 metres, meanwhile, Altitude is the developer’s tallest UK building - a trend in modern design that is driven by improvements in technology. “Height is a key thing,” says Kevin Mofid, head of industrial research at Savills. “Buildings are going to have to get taller because it means occupiers can do more automated things inside them.”

With the right infrastructure in place, occupiers have the flexibility to fit out buildings to meet their own technological requirements. “Some companies will be really technologically advanced in terms of what they want to achieve but other companies are not there at all and are still just functioning as traditional warehouse operations,” says Mofid.

When it comes to build-to-suit facilities, Dickman says db symmetry works very closely with potential occupiers to create schemes that not only meet their existing operational requirements but are also flexible enough to adapt with their business. For speculative developments that need to appeal to as wide an audience as possible, it is the occupier that drives the changes in technology, he adds.

Ocado is just one example of a business that is customising its distribution centres to incorporate the latest cutting-edge technologies. Its most advanced shed in Andover is one of the most automated warehouses in the world featuring hundreds of robots working together to retrieve the groceries customers have ordered from storage.

The online grocer has its own technology arm, Ocado Technologies, which aims to harness the power of artificial intelligence across the whole supply chain. New applications in development include a robot engineer that diagnoses problems with machinery and provides assembly line engineers with the tools to fix them and a robot hand-designed to pick and pack groceries without damaging them. 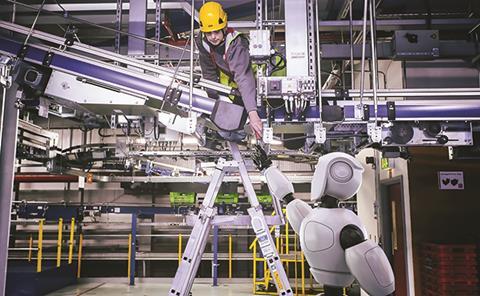 One of the great hopes for technology is that connected machines and other objects - the so-called ‘Internet of Things’ (IoT) - will unlock huge efficiencies within supply chains. IoT technology is already widely used in applications such as commercial telematics to improve logistics efficiency in trucking fleets and smart sensors incorporated into equipment or even clothing to monitor manufacturing processes. Such technology and the data it generates can deliver tangible, if marginal, benefits, but Mofid believes the greatest potential for IoT technologies is in enabling greater overall visibility of the end-to-end supply chain.

“Stock visibility for retailers is a big thing,” he says. “If retailers have a better idea of what stock they’re holding in store, that will change replenishment patterns.”

For warehouse design and development, the implications of occupiers being able to accurately predict their demand are potentially huge. “If you can make your whole supply chain more visible, you ought to be able to take some inventory out of the supply chain and then maybe you don’t need as much warehousing to store that inventory,” says Jon Sleeman, director of JLL’s EMEA and UK logistics and industrial research team.

Amazon recently hinted at plans to take lean manufacturing to the next level by patenting on-demand clothing manufacturing warehouses - a system designed to quickly produce clothing and other items only after a customer order is placed.

The logical end game for on-demand manufacturing is that less space will be required to store and process stock. Yet the trend over time is in the opposite direction. Warehouses are getting larger because businesses haven’t been able to reduce their inventory as much as they thought they would, says Sleeman.

He attributes this in part to the growth in ecommerce, which has seen a huge proliferation in the number and variety of items being sold and that need to be kept in stock. He adds that although the lead time for stock might be four or five weeks, customer orders must still be fulfilled in a matter of days so retailers must hold inventory to bridge the gap between order and supply. 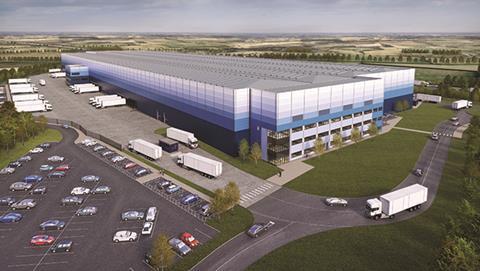 Sleeman also points to increased volatility in demand as a reason why ‘big data’ hasn’t led to the level of reduction in inventory that many expected. “Retail is quite volatile, with a lot of sales happening in the last three months of the year. Ecommerce, in particular, is also extremely volatile with lots of peaks and troughs, so the more volatility there is the more difficult it is to predict demand on a daily basis.”

Another technology that many predict will affect the location and design of warehousing facilities is the autonomous vehicle, which, although some way from being fully commercialised, is the subject of significant investment both from business and government.

In August, driverless lorries on motorways came a step closer to reality after the government announced £8.1m in funding for trials of ‘platooning’, whereby a convoy of lorries accelerates, brakes and steers in sync through the use of wireless technology. The trials will involve up to three heavy-goods vehicles travelling in convoy with acceleration and braking controlled by the lead vehicle. All lorries in the platoon will always have a driver ready to take control at any time.

Media coverage has understandably focused on the implications for Britain’s road network and in particular concerns around the safety of other road users. But the potential upsides for warehousing are so significant that momentum continues to gather. In an article published on JLL’s website last year, Sleeman suggested that the adoption of driverless lorries and fulfilment robots could mean warehouses would no longer need to be situated close to large labour markets and could instead be on cheaper, less sought-after land.

The narrative that growing automation within industries will result in dramatic reductions in the human workforce has gained currency in recent years. However, the evidence to date does not support this. Ocado, for instance, says that rather than replacing humans, its continued investment in automation has not led to a fall in the work done by people but simply a shift in the type of roles they perform.

Jonathan Dawes, planning director at db symmetry, goes further, claiming that the use of robotic technology in storage and distribution is actually helping to create more jobs in the advanced logistics sector, not fewer. “Robots are improving efficiency and maximising space, which, in turn, requires a greater number of staff to process, quality-check and fulfil orders,” he contends.

Even if further automation were to eventually reduce the need for manual labour, Sleeman believes this won’t translate to occupiers looking for shed space outside the traditional industrial and logistics heartlands - and away from large employment pools - en masse. The reason, he says, is that the UK is a small country with a stable population and relatively fixed infrastructure.

“Given that warehouses are positioned to service that population or industry, if there’s not a huge change in the geography or infrastructure [of the UK], it might not change that much,” he says.

Mofid agrees and says that the location of sheds will still be determined by their accessibility to key entry points such as the ports of Southampton and Felixstowe and Heathrow Airport.

For this reason and because of the road mile cost of physically distributing goods long distances, he believes “there will continue to be a focus on core locations that service multiple population centres and are able to access all parts of the UK within an efficient time period”. 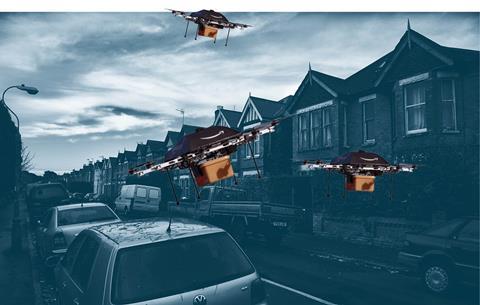 One technology that has the potential to transform the last mile of delivery is drones. Already widely used in sectors such as agriculture and defence, drones are now used by retailers to fulfil customer orders in as little as 30 minutes.

Last year, the Civil Aviation Authority granted Amazon special permission to test delivery drones unfettered by some of the regulations that usually bind their use. In December, Amazon reported the successful trial of its Prime Air drone service after a TV streaming stick and a bag of popcorn were delivered directly to the garden of a nearby customer in Cambridge.

If such a delivery model was widely adopted, it could lead to an increase in demand for distribution facilities in urban centres within easy reach of retailers’ customer bases. Indeed, Verbeek notes that infill logistics has become an asset class in itself since the growth in ecommerce.

However, with land at a premium, businesses requiring space in urban centres may be forced to take older buildings that may not have been built to support the level of technology required in a modern operation.

However, Verbeek’s view is that modern logistics facilities are still largely first-generation warehouses that won’t need to undergo much change. “Those buildings are only 20 years old and in the main have suffered very little functional obsolescence because they were designed broadly speaking to today’s standards. They might be under-resourced in power; they might be lower [in height] but they’re still functional buildings.”

Indeed, while the ‘shed of the future’ may evoke images of space-age wizardry, a lot of the most sophisticated operations are taking place in standard buildings.

Occupiers’ processes are likely to change considerably as a result of technological innovations but it appears that they won’t have the impact on shed design and location that many would have predicted. At least, not yet.