Warehouse developers aim to get ahead of the game by installing charging facilities for electric HGVs and vans, as well as investing in solar power. Rob Brown reports

There are nearly half a million heavy-goods vehicles (HGVs) on the UK’s roads, which, according to the Department for Transport, travel around 10 billion miles and transport approximately 1.3 billion tonnes of goods a year. Their continued presence on our streets, however, comes at a cost to both business and the environment.

Diesel prices hit an all-time high of almost £2 a litre this summer, which in turn has affected firms’ margins and driven up consumer prices. Mile for mile, HGVs are also Britain’s dirtiest vehicles, responsible for 16% of carbon dioxide emissions from domestic transport.

In light of this, industrial and logistics (I&L) firms are increasingly turning to electric vehicles (EVs) and require charging points. Marcus Phayer, associate director for I&L at Godwin Developments, says EV charging is becoming integral to many I&L occupiers. “As such, planning authorities up and down the country are obligating developers to install EV chargers to serve a percentage of parking spaces,” he says.

Such is the weight of demand from investors and occupiers for developments with strong ESG credentials, Phayer says developers are now looking to future-proof all parking areas by adding ducting for charger installations.

“Common practice is to add one or two car charging points. This is simply not sustainable”

The current percentage of EV charging provision at UK warehouses stands at around 10% of parking spaces, say developers, but some are going much further. GLi, a joint venture between real estate developers PATRIZIA and KSP, is developing net zero last-mile logistics sites across London. At its sites, it offers EV charging points for cars and vans and battery storage as standard.

“As a sector, we must do better to future-proof our developments,” says GLi chief executive David Johnson. “Common practice is to add one or two car charging points. This is simply not sustainable and will require further investment to meet future occupier demands.

“Occupiers don’t want queues of delivery vans blocking yards waiting to be charged rather than being on the road.”

It is currently focusing on providing charging for cars and fleet vans but Johnson says its industrial units will have the infrastructure and power for HGV charging once battery-powered trucks become more common.

Investing in EV charging increasingly makes sense given the regulations due to come into force, says Luke Askill, associate at property and building consultancy Ridge. “By 2030 there will be a ban on the sale of new petrol and diesel cars [and vans] and by 2035 all new cars and vans will be required to be fully zero emission at the tailpipe,” he says. “These dates are not far away.”

He adds that developers need to take into account a range of factors including providing charging capacity for electric work vehicles and staff cars but without it affecting the operation of the building.

While the sale of new petrol and diesel cars will be banned by 2030, new petrol or diesel HGVs will not be banned until 2040. Nevertheless, eHGVs are gaining momentum. 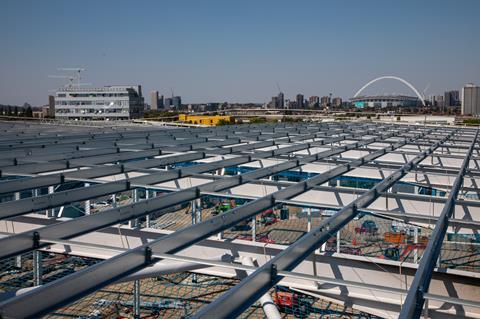 In January, Tesco took delivery of what it claimed were the UK’s first fully electric commercial articulated lorries. Amazon, Carlsberg Marston’s and others have since adopted eHGVs of varying sizes. And warehousing is changing to accommodate them.

“The new shed developments we’re seeing all have EV charging provision for cars and vans and the bigger players are starting to secure warehouses with provision for HGVs,” says Victoria Towers, head of the industrial and logistics team at law firm Forsters. “We expect other businesses to follow suit, especially as restrictions and extra charges come into force in towns and city centres to deter the use of petrol and diesel vehicles.”

Electric cars and smaller delivery vehicles can be charged with ‘fast’ 7-22kW chargers, which offer a full charge in anywhere between four and 10 hours, depending on the vehicle. Such chargers offer a steady pace of charge over several hours, are relatively inexpensive and are therefore most common in I&L schemes, says Richard Shepherd-Cross, fund manager at Custodian REIT.

But increasingly occupiers are seeking chargers for larger EVs as well. “Tenants’ requirements for delivery vehicles to be active is pushing urban logistics buildings towards rapid [50kW-plus] chargers,” says Shepherd-Cross. “An electric van may be used for 16 hours a day across two shifts. It is not cost effective to lose seven-plus hours a day recharging via a 7kW fast charger.”

Rapid chargers are more useful as they can provide a near-full charge in under an hour, says Shepherd-Cross, reducing the time they are off the road. However, rapid and ultra-rapid (150kW-plus) chargers, which can deliver a full charge in just 20 minutes, are more expensive and can cause significantly more headaches to install. “A dual 7kW charger capable of charging two vehicles is around £2,000, whereas a rapid 75kW charger, also capable of charging two vehicles, will be more than £30,000 plus enabling works,” explains Shepherd-Cross.

“Where operators can accommodate their business without the need for rapid chargers, fast chargers do have benefits – chiefly cost, but also that they are less demanding of power capacity, alleviating the need for and cost of a substation connection. Although 75kW-plus rapid chargers are quickest, they require 93.8kVA of power.”

This significant level of drain on the power supply could affect capacity in their buildings. Shepherd-Cross says the installation of rapid chargers therefore requires careful planning with the local distribution network operator (DNO), but this may take time and can be extremely costly. 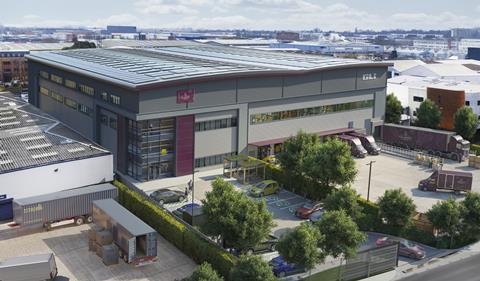 Warehouse owners and occupiers don’t necessarily have to rely on the National Grid. They can also look to renewable energy sources. The UK Warehousing Association (UKWA) estimates that the sector has the potential to double the UK’s solar energy capacity if photovoltaic panels are added to warehouse roofs.

“Warehouse owners across the country are struggling to pay for gas-powered electricity from the grid, when they could be generating all the power they need and more from the roofs of their buildings,” UKWA chief executive Clare Bottle said in September, calling on the government to break the “monopoly” DNOs have on determining who can have access to the grid and at what cost.

“Out of sight, easy to maintain and affordable, the case for solar should be obvious and yet we are being held back by poor market practice and failures of regulation,” she added. “We need a fundamental rethink of the way in which DNOs hold power over access to the grid, how they get renewable schemes connected to the grid and the prices they charge.”

Notwithstanding the influence of the DNOs on the ability of operators to sell any excess power they generate back to the grid, the case for solar is growing.

“The financial model for solar is very strong – its efficiency has been growing and its cost has decreased,” says Savills energy consultant Silvia Manzoni. “With current electricity prices, the return on investment can be as low as two years with a lifetime of well over 20 years.”

Potential solutions to the mounting environmental challenges and cost pressures UK warehouse operators are facing are over their heads. Thankfully, they’re also within their grasp.