A former RAF airbase near Warrington has been transformed into one of the North West’s most important industrial and logistics sites. Noella Pio Kivlehan reports 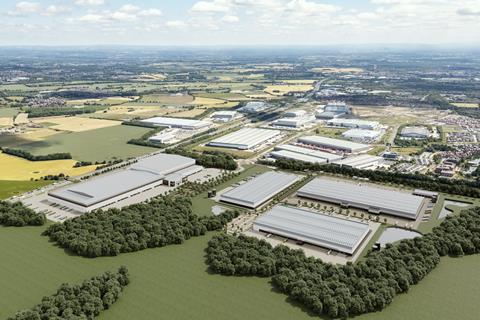 During the Second World War, one area of the North West became home to more than 18,500 US personnel. Opened in 1940, RAF Burtonwood in Warrington was transferred over to US Army Air Forces (USAAF) in 1942 for its war operations and went on to play a crucial role in the aerial battle against Germany.

After the war, it became an equipment depot for the RAF and a secret European base for the USAAF, before eventually closing in the early 1990s.

The end of one era heralded the start of another. Today, the site is home to Omega, the North West’s biggest mixed-use site at 775 acres, with a gross development value of £2bn. Over the past 12 years, more than 5m sq ft of industrial and logistics (I&L) space has been developed on the site, and its occupiers now include food distribution firm Brakes, plus Asda, Royal Mail, Amazon and many others.

Last month, food retailer Iceland became the latest occupier at the site, taking 505,000 sq ft for its new distribution warehouse. And in September, investment manager Barings confirmed it would forward-fund a 308,905 sq ft development at the site and appointed Knight Frank and B8 Real Estate as joint agents. The latest additions mean only one pitch is left at Omega.

“The oldest building is just 10 years old, meaning they haven’t hit that point where they need a refit”

However, the path to I&L success hasn’t been an easy one. When RAF Burtonwood closed, its proximity to the M62 and M8 meant the site was considered ideal for the development of an I&L park. But in the mid-1990s, out-of-town office parks were in demand, so this was the original use planned when Miller Developments and RBS were selected by English Partnerships to develop Omega in 2001.

The opening of M62 Junction 8 in 2002, pushed through by the North West Regional Development Agency, was significant to the development. “It was key because it effectively gave us direct access from the site straight on to the motorway network,” says Colin Graham, director of Miller Developments.

Then came the global economic downturn of 2008 that led firms to re-evaluate their need for office space and developers to pause their spending. The result was the ripping up of the original Omega masterplan in 2010.

“Out-of-town offices were falling out of favour,” says Graham. “Having spent five years masterplanning for offices, we realised there was never going to be the demand, and the masterplan had to evolve to be more blended, with some offices, logistics and the introduction of some residential and mixed-use. Eventually, the office components disappeared altogether. But requirement for logistics, after housing, has been phenomenal.”

Brakes signed up first, in December 2012, taking 200,000 sq ft, followed swiftly by Asda. It signalled the start of a decade of big-name occupiers taking space at the site, which is split into three sections: Omega South, North and West. The former two sites, in Warrington, are full, with the latter site, in St Helen’s, under development.

Last year, Miller secured planning permission for an additional 2.3m sq ft at Omega West. The site is divided up into four plots and deals have already been secured on three of them. “That leaves Unit 4, which is about 400,000 sq ft,” explains Graham. “We need to divert a water course from it, which will happen next summer.”

The location and quality of the original builds have been crucial to the site’s success. “The oldest building is just 10 years old, meaning they haven’t hit that point in the lifespan yet where they need a refit,” says Graham.

However, occupiers and investors are now looking for higher levels of energy performance from their buildings. For example, the new Barings-funded unit will have photovoltaic panels and electric vehicle charging points and target BREEAM ‘Excellent’ and EPC ‘A’ ratings.

Pete Owen, engineering, environment and property director at Brakes, says its building has stood the test of time well and the layout allows it to continue to drive operational efficiencies. “With the climate high on the agenda, it’s about trying to find new ways to reduce its environmental impact. We’ve worked very closely with the landlord to ensure that we can maximise sustainability,” he says. 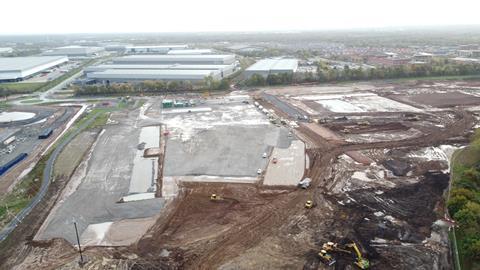 One trend Miller has noticed is the need to accommodate robotics. A new warehouse for TJ Morris, owner of Home Bargains, will be 43.5m high, compared with the 15m to 20m average for a normal unit. Robotics mean you can build much higher, says Graham, because you no longer have to rely on forklifts for accessing goods. “The building is now effectively a waterproof wrapper for robotic systems, which are multiples of the cost of the building,” he explains.

Once Omega West is finished, the whole Omega site will be effectively completed, says Graham, adding: “We can’t go east or south because of residential [development], so if it does go further, it’s going to be to the west.”

With I&L space now in high demand, Warrington Borough Council is also now pondering where the next ‘Omega’ could be.

“There’s no further expansion of Omega from Warrington’s perspective,” says Steve Park, director of growth at Warrington Borough Council. “We have had to look elsewhere in our borough to sites that lend themselves to commercial development, which we have done in our draft [local] plan.”

The two main sites the council has identified are the nearly 3m sq ft Six 56 Warrington, and the 2m sq ft Fiddler’s Fairy Power Station. Langtree and Panattoni are bringing forward Six 56, which is named after its green-belt location on the junction of the M6 and M56. “It is perfectly placed and is looking more like being [class] B8 logistics use, given where it sits,” says Park. “There is potential to link it up with other existing assets on the M56.”

Fiddler’s Fairy Power Station, in the west of the borough, was built in the 1950s but decommissioned in 2020. Owner Peel NRE is proposing an industrial development, a new community park and wildlife areas. “I’m confident both will be in the local plan when the inspector has made its decision,” says Park. It is hoped the plan will be adopted by next summer.

While the new sites won’t have the history of Omega, they will add to Warrington’s push for future employment and residential space, with the council seeking to make allies of the developers.

Park says the council is pleased with how it has worked in partnership so far: “There’s pride on two fronts: on what we’ve done and how we’ve done it.”

Landmark scheme: how Omega West will look when complete (top) and under construction