Toby Courtauld chats with Andrew Teacher, reflecting on 20 years at the helm of one of London’s largest office landlords, GPE, and what the next decade might bring for the real estate sector.

GPE’s chief executive Toby Courtauld has put sustainability at the core of a strategy that has seen the office REIT reposition itself to cater to occupier demands for simpler, tech-enabled and more flexible workspace. Under his stewardship, GPE has continued to be a leader in premium London office HQs, as has more recently opened up a new market in more flexible, serviced offices.

Proof points of Courtauld’s success have included major pre-lettings of 227,324 sq ft to Facebook in 2015 and, more recently, 321,100 sq ft at 2 Aldermanbury Square to Clifford Chance at a company record of £77 per sq ft.

Above all though, he’s shown how to walk-the-walk on climate risk where many others are content to dodge hard questions.

As sustainability and social impact director Janine Cole discussed in a previous episode of PropCast, GPE has created a decarbonisation fund to retrofit its buildings, funded by an internal carbon price to promote the reuse of building materials. Courtauld sees no contradiction between GPE’s sustainability policy and his ability to deliver value for shareholders – which remains his focus.

Courtauld grew up in Asia and cut his teeth early-career in Hong Kong, working for MEPC. Contending with the 1990s recession and the Dotcom bubble taught important lessons that guided the organisation that GPE is today, including its atypical approach to seeking low leverage – a strategy that looks increasingly savvy as the era of historically low interest rates comes to an end.

“We’ll always be opportunistic when it comes to looking at the cost of our borrowing, but we’ll always make sure we have maximum flexibility in it,” says Courtauld.

As for the types of real estate companies that tended to outperform, Courtauld highlights those that oriented their strategy around a particular specialism. Consequently, London has been GPE’s heartland since the early 2000s, with Courtauld quickening the pace of concentration on the capital as “investment in London was a no-brainer”. London’s vibrancy, cultural attractions, its openness and adherence to the rule of law represented tailwinds as much as its world leadership in industries such as financial services. 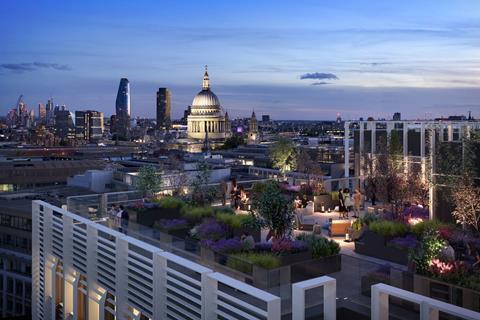 Courtauld notes that the world rarely stands still. During his time at the tiller, he has navigated Brexit, the Global Financial Crisis and the knock-on effects of the difficulties in the Eurozone. While challenging, Courtauld puts GPE’s resilience down to having a “good team at the top of their game” around him, as well as management latitude arising from a constructive relationship with shareholders. Simply put, GPE seeks to take advantage of circumstances that might put others on the backfoot.

However, there are some challenges that require the industry to pull together, according to Courtauld – in particular climate change. GPE has pioneered the use of ‘circular economy’ principles in reusing materials from one asset in another, which, at its Aldermanbury Square building, has saved a total of 1,200 tonnes of steel and as a result more than 2,200 tonnes of CO2.

He believes that such practices will become the norm, as “the reality is that as the economic cost of raw materials goes up relative to reuse, you will find market behaviours changing.” He predicts that “the supply chain in 5 years’ time is completely different to that of 25 years ago with all sorts of opportunities for reuse.”

Courtauld believes that top of the shopping list for customers when seeking workspace are sustainability, talent retention and the promotion of health and wellbeing. This has conditioned GPE’s asset strategy: “If we did not think that we could create the spaces that our customers were looking for… we would have sold the assets.”

“The way that we talk about our buildings and the forward returns of our buildings are much more oriented around sustainability than ever before,’’ he continues, “because it’s become an economic question.”

Courtauld also notes the relationship between the real estate industry and its customers has changed. For businesses, this now means “knowing what your customer wants and finding a way to create spaces that will be magnets for their people to come and work in.”

As such, the services put into a GPE building today are much more customer oriented. GPE’s app sesame®, for instance, grants the user access to the building, room bookings, and a marketplace for local services as well as control over the building’s environment. Courtauld says that this also provides an understanding of the way the building is being used, and informs more constructive dialogue with customers.

For Courtauld, there remains a strong market for the best-in-class premium office HQ, which has long been a specialism of GPE. Yet there are many companies that are looking for a partner that can support them as they grow. GPE’s new Flex proposition responds to that need – as the name suggests, affording flexibility and offering services beyond simply providing space.

Situated in vibrant London neighbourhoods, near major transport hubs, GPE’s Flex offices are designed to offer a blend of convenient services and space for personal branding. Courtauld reflects that what unifies GPE’s approach across these offerings is the focus on understanding and meeting customer needs – in essence responding to a broader sea change in real estate over the course of his career.

Courtauld sees these two core developments – the need for best-in-class HQs for large corporations on longer leases, and flexible floors for corporates that want “an easier experience” – as defining the future of the office. Between GPE’s Flex offering and its large flagships in Hanover Square and Finsbury Square, the company looks well poised to take advantage of these trends in the coming years.

So it’s a thrilling time to be involved in real estate, according to Courtauld. Climate change, the new world of work and the digitalisation of much of the economy only serve to confirm that the only constant is change.

Soho’s John James has a legacy of supporting independents, and building a new home for Harry Potter

London has always bounced back from challenges, says Landsec chief