The head of proptech for JLL in the Asia-Pacific region, Jordan Kostelac, speaks to Andrew Teacher about the area’s unique lessons for real estate and why we’re aiming at the wrong targets when it comes to moderninising the sector.

PropCast: The Property Podcast · #154: JLL’s head of proptech in APAC on why brokers will always survive disruption

Joining the podcast remotely from his home in Hong Kong, Jordan Kostelac rose to become head of technological innovation for JLL in one of the world’s most exciting regions after beginning his career somewhere a little more mundane – a warehouse in Ohio.

However, it was here that he began a specialism that has followed him through his career: using technology to improve business practices and streamline manual processes.

When a trip to Montréal prompted the realisation that “the world is bigger than Ohio”, Kostelac used the Mandarin he had learned during university to move first to Wuhan, and later Hong Kong – a city he soon fell in love with.

As he sees it, the “diverse sets of challenges” the region presents, such as wide linguistic diversity and comparatively low economic development in many countries, can be viewed as a positive: “You can view constraints as opportunities – if you can road test a product in southeast Asia, it’s definitely going to translate to other markets relatively easily.” 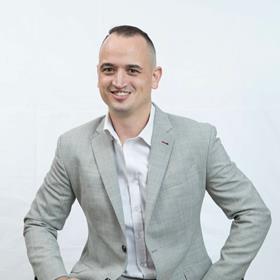 Yet innovation for innovation’s sake doesn’t inspire Kostelac. “So much of tech innovation is white collar solutions to white collar problems,” he argues, like reducing the amount of time office workers spend making Gantt charts – as tedious as that may be.

“No one’s really building the tools for the people who are doing the work,” he says. “The work where you have to roll your sleeves up.” As Kostelac sees it, there are three areas of proptech that are oversaturated: residential transactions, project management, and energy.

Instead, he argues that the focus should be on standardising data across the industry in order to use existing powerful technologies, such as AI, machine learning and the blockchain, to draw greater insights.

“We’re fighting over a shrinking slice of the pie if we don’t come together as an industry and create a better set of standards,” he remarks.

And while climate change is perhaps the most pressing issue facing the industry – and indeed humanity – it’s a tricky issue in Asia-Pacific.

“They don’t care about burning coal in an area where electricity only operates 2-3 hours a day,” he points out. “We have to be conscientious about the different set of expectations we should have for prosperous economies versus those that are still emerging.”

For all the pace of innovation, there’s one part of real estate that Kostelac sees as immune to disruption, largely because it’s integral to the structure of how the industry functions.

“Brokers are like the cockroaches of the real estate world,” he observes. “There could be a nuclear blast and they will still be scurrying around.”